Hello fans of PoC. I would like to share with you some pictures of my CPL foster kittens (see below - sorry they aren’t very good).

Right from when I fostered them at 2 days old (with their mom) I noticed there was a huge difference between the smallest and the second smallest when compared with the two largest. The difference became even more apparent as they grew (they are now 7 weeks).

First of all the largest 2 are Black and White and fluffy. The other 2 are Tabby and white and have short curly coats and stubby whiskers. (One is a golden Tabby colour and the other is Dark Grey Tabby) The Dark Grey Tabby has a very short curly coat, very large ears and ridges on the back of his neck. He is also (as you can see from the photo’s half the size of his sibling!).

I’m wondering if a Devon or Cornish Rex has had a sneaky go at mom? Is it possible for a litter to be fathered by 2 separate toms? Or is it that he is just the smallest? I think I could accept that he was just small if it wasn’t for his stubby whiskers, huge ears and tight curly coat!

Fact of the matter is I've never seen anything like them and I wanted to ask if one litter can have 2 fathers. The reason why I ask will be apparent when you see the photos.

They are all adorable but he’s just the funniest little thing!

My friend has 2 Cornish Rex’s and she says that when they are born and even as kittens they are like little aliens, well that’s what he’s like!

Here are the two photos of the litter: 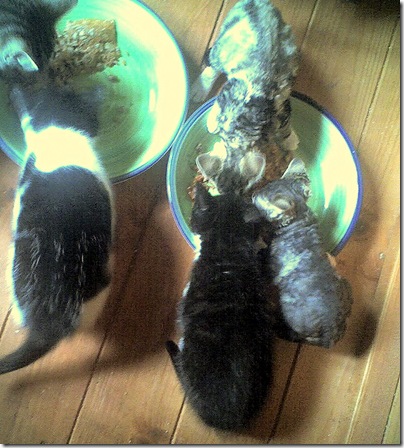 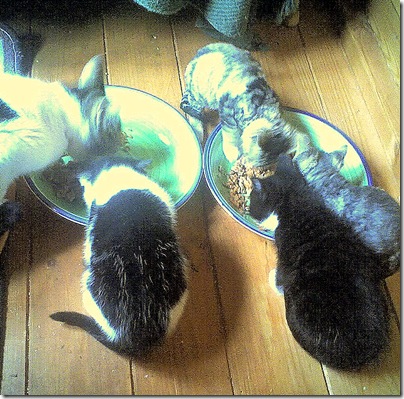 Please comment as I’m keen to hear you thoughts. Thanks.

Hi Tracey... the short answer is that female cats can produce litters that were fathered by more than one father.

Superfecundation is the fertilization of two or more ova from the same cycle by sperm from separate acts of sexual intercourse. It can rarely happen with humans too. It is extremely common in dogs, with stray dogs often whelping litters where every puppy is of a different father1.