↓
Home→Human to cat relationship→Survey by Which? tells us that people approve and disapprove of certain animal species

The online Which? review magazine says that cats, foxes and squirrels come out on top of the list of animals that people in Britain want to keep out of their garden.

Domestic cat in garden eyes up a blue tit. Photo in public domain.

Apparently almost half of the survey respondents prefer that their neighbours’ cats stayed out of their gardens.

The reason? Well, one of the reasons is that cats scare away and attack wildlife, in particular birds. This reason is therefore entirely driven by a preference for birds over cats. There is no getting away from it.

One similar reason is given for keeping foxes out of gardens which was desired by a third of respondents. They said that foxes deterred other wildlife. Once again this is speciesism – a preference for one species over another.

Other reasons in both instances were the fouling (defecating and peeing) of the garden and in the case of cats digging up flower beds and borders. Foxes also dig little holes in the lawn with their nose when sniffing for earth worms.

There is clearly a greater tolerance for the behaviour of birds even if some birds are pretty disruptive such as the rose-ringed parakeet which is an invasive species in the UK. This bird creates a lot of noise and can dominate bird feeders (my cat caught one once, I am sad to say – see photo below). 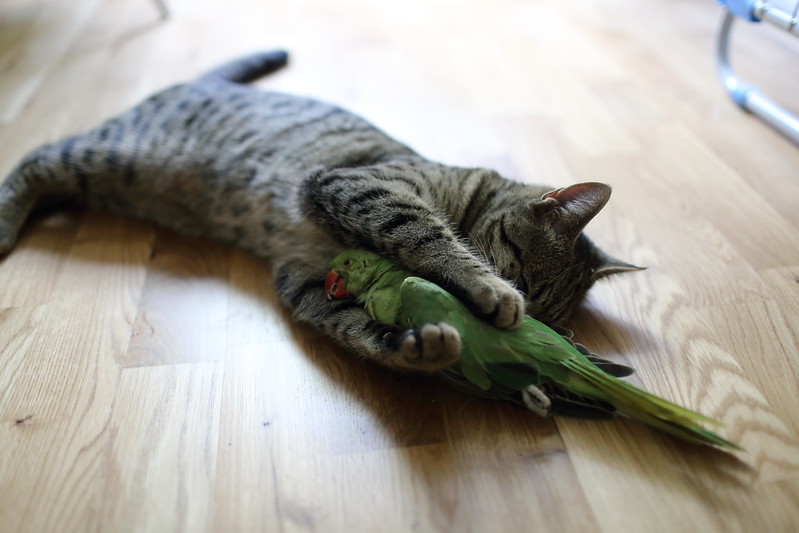 People who are proud of their gardens want a certain species of wild animal to decorate it. It is all part of the image that house proud people want to cultivate. They want a Mercedes in the front drive to indicate wealth and success, the large home behind, the perfect garden with birds tweeting on a bird table but please, no horrible cats and foxes because they disturb this utopian territory – their castle – that people so want to defend from both unwanted people and animals.

In my book, if you profess to like or love animals it must mean all animals otherwise you are indulging in speciesism which is subject to one’s personal dislikes and likes often for frivolous and unjustifiable reasons.

It is either speciesism as stated or a lot of people like animals provided that they interact with them on their terms only. It is an uncomfortable relationship.

See the Which? article.