The husband wanted to drown them. The wife didn’t like the idea. The couples’ cats were placed in a heavy, large white box, zipped tied shut and placed in the back of their car. That’s the picture. A good picture which encapsulates an abuse of cats. Scared cats peering out as they push the lid of the box up to try and get some air and to see what’s happening.

Was the intention to take them to a place where they were to be downed? It seems that the box was normally used for a different purpose. There were no air holes and it was unsuited to hold cats.

It contained 3 adult cats and five kittens as far as I can tell from the report. It appears that they were not spayed and neutered.

The wife (we don’t have names) contacted someone (we have no details) who are described as ‘good Samaritans’ for their help. In turn they contacted a local animal rescue: Laskeshore Animal Friends. Lakeshore reported the story on their Facebook page which is the source of this post.

When the box was opened one of the adult cats jumped out. I’ll have to presume that at this stage that the car was at Lakeshore Animal Friends and that the photos are by a volunteer of that organisation.

The cat was caught by the husband (the man who is accused of wanting to drown the cats). He put the cat back into the couples’ car. That cat is unaccounted for. Comment: it seems the couple kept that cat.

The remaining cats are being cared in foster homes attached to Lakeshore. The cats will receive or have received the usual cat rescue treatment: checked over for health, vaccinated and spayed and neutered. 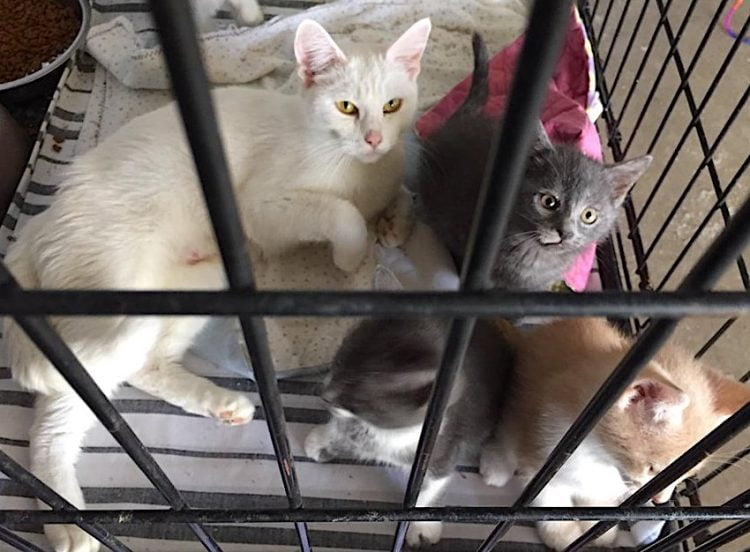 Out of the death box and cared for. Photo: Lakeshore Animal Friends.

It also appears that Laskeshore contacted the police about this. They say:

“Lakeshore Animal Friends has notified the Mason County Sheriff’s department and we are anxiously waiting for an update on what we believe is animal abandonment/cruelty. We have reason to believe this couple can be identified and the ‘death box’ can be made available as well.”

Comment: the police won’t do anything because no crime has occurred. It was nearly a crime but not quite. The wife stopped it going that far. I don’t think holding the cats in this box, although cat abuse and cruel, is sufficient for the police to get involved bearing in mind resources and motivation.

“So so heartbreaking that someone can be that cruel! Spay and Neuter PEOPLE!!! And these innocent animals would not have to endure this kind of treatment!!! This happens because people are irresponsible! I say if we could do to the people what they do to the animals, maybe they might think twice!!! This is so maddening! 😡 ” Commentor Lisa M Elliot on FB