Recently, the Scottish Fold has become more popular because of an increased interest in this sweet looking cat, particularly from pop stars and high profile indivduals. You might say that they have become cats designed for celebrities. Their baby-like faces are attractive and striking. Taylor Swift is enamoured of them. She is a very high profile celebrity with no less than 139 million followers on her Instagram page. On that page there are bound to be photographs of her Scottish Fold. Has she got more than one? I have forgotten. I remember a photograph of her carrying her Scottish under her arm while leaving a building. There are some great photographs of Captain Olivia Benson! Below is one of them from her Instagram page and it has received no less than 1,882,819 likes! 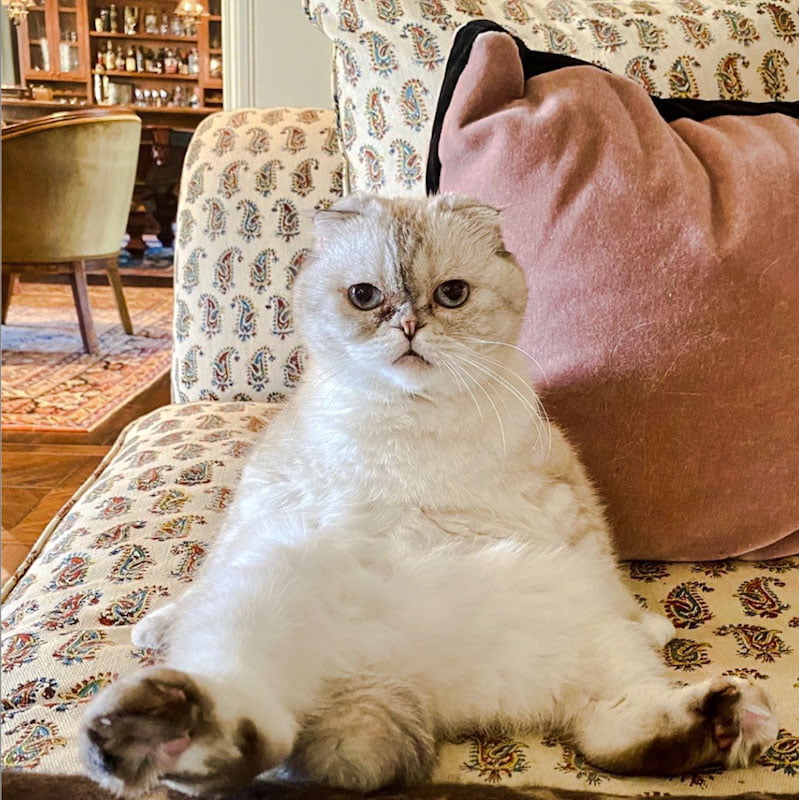 Olivia Benson, the feline partner (with others) of Taylor Swift. Photo: Taylor Swift on Instagram.

Okay, the Scottish Fold is getting a lot of publicity at the moment, to the breed’s advantage.

I’ve said in the title that the Scottish Fold is a sweet cat and this is supported by Gloria Stephens in her book Legacy of the Cat in which she describes them as hardy cats with sweet dispositions and a sweet expression. Their voice is small and they’re quite quiet but they enjoy human companionship and are entirely endearing to their human companions.

They have an easy nature which allows them to adapt to a variety of home situations including being carried under their arm out of the building by their owner! Apparently, they’re good with children and don’t mind the noise and if socialised they are also good with animals and adapt nicely to apartment life. All fantastic recommendations.

The first Scottish Role was discovered in 1961 in Scotland (believe it or nor!) by a shepherd, William Ross. They are a medium-sized breed with a standard body shape being neither elongated or cobby (stocky). 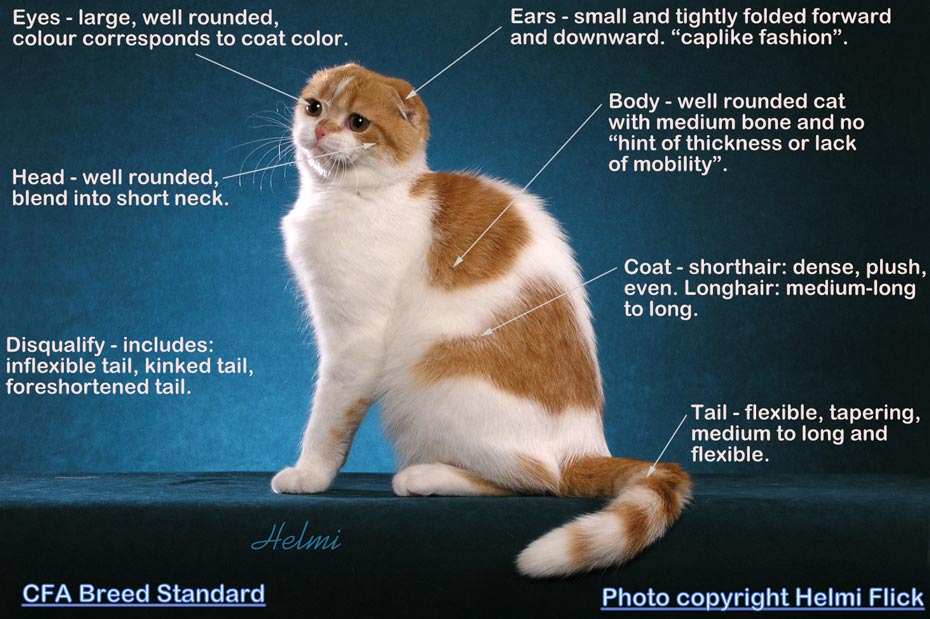 Scottish Fold breed standard. Image: PoC based on image by Helmi Flick with her permission.

We can now get down to the nitty-gritty. You might not know but Scottish Fold kittens are born with straight ears. The folding of the ears is the result of a dominant mutated gene. Not all of the kittens in a litter will have folded ears; half do. Between the ages of 13 and 23 days old you will see in those kittens that develop folded ears a “crimp” emerging in the ear flaps. They gradually fold. 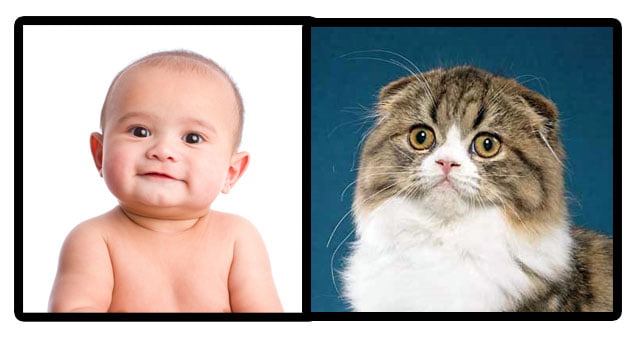 This Latin phrase means “buyer beware”. I say this because the gene which causes ears to fold can cause cartilage problems in other parts of the body. And these problems are genuine health problems. There can be a thickening of the tail and swollen (thickened) feet.

In order to avoid these serious issues breeders shouldn’t breed one Scottish Fold with another. When a breeder breeds a Fold to a non-Fold they rarely get health problems mentioned above. If a kitten in the womb has both mutated genes i.e the homozygous form it will die in the womb. Scottish Fold to Scottish Fold matings results in one in three kittens developing mild to severe skeletal lesions. There are severe joint disease and vertebral deformities and prognathia (either of the jaws protrudes). The tail becomes very inflexible and is shortened. The hocks may be curved and the rear legs shortened. The breed should be developed by breeding heterozygotes to American and British Shorthair cats.

What happens to the non-folded ear cats? What happens to those cats born with the cartilage defects described? We are not told. I think these are fair questions and they should affect how popular the breed is. The GCCF (UK’s premier cat association) don’t recognise the breed. Also it should be mentioned that the folded ears may cause a propensity for ear canal health problems and it must affect hearing to a certain extent.

I have gone on a bit but essentially you should check with the breeder when buying a Scottish Fold. Ask them the about the health problems and how they deal with them. Check for flexibility in the cat’s tail, feet and legs. Check for lack of mobility and thickness or splayed toes. Also check for arthritis. A proper and decent breeder of Scottish Folds will be able to provide good answers to these admittedly difficult questions but don’t let these health issues cloud your judgement, please. And get a health certificate so it is in writing.