Tabby Cat Facts For Kids. All these photographs are copyright Helmi Flick. Please note that orange and red mean the same thing. “Red” is used more by experts and “orange” by cat owners.

The collage has been taken from a page on tabby cat facts for kids as the original image has been lost. You can read more about the tabby coat by clicking on the link.

The tabby coat is so ubiquitous that people searching for pictures should be shown pictures of tabby wildcats, tabby random bred cats and tabby purebred cats such as the Abyssinian (agouti gene ticked coat). Examples are on this page. There are thousands more on PoC.

This allows people to see how the tabby coat crosses the boundaries between all types of cats.

The tabby coat is the original cat coat because the first wildcats to be domesticated were tabby cats: the European wildcat and the African wildcat. 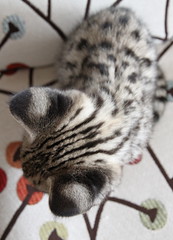 purebred cat that was developed from the African wildcat has a high contrast, highly refined, version of the tabby coat – the Egyptian Mau (see video above) – a very popular purebred cat. This cat has the only naturally occuring spotted coat apparently.

When you compare the Scottish wildcat with a domestic cat you can also clearly see what I think is the major common denominator between wild and domestic cat – the tabby coat.

The cat in the photo just left of this text is a first fillial Savannah cat called FOCUS. His father was a serval, a medium sized wildcat. FOCUS has a spotted tabby coat as has the serval, of course (see video below):

Sometimes in the show cat world just the pointing is a tabby coat. By this I mean the extremities of the body as seen on the Siamese cat. These are called lynx pointed Siamese cats.

Below is a symphony in tabby!

Tabby Cat Breed – no, not a breed but a coat type.

In the video above you will see a Somali show cat. He is a long haired Abyssinian and his coat is “ticked” – a form of tabby coat. A moving tabby cat picture!