People have different points of view about Thai cats. And it is quite a complicated history. I will present my views and try and simplify the history. Although I expect someone to disagree with me. Thai cats are a relatively new form of Siamese cat. It is probably politically incorrect to describe Thai cats as Siamese cats because the breeders of Thai cats want them to be distinct and separate from the original Siamese.

So Thai cats are a distinct breed of cat but they look pretty much identical to the original Siamese cats. I am referring to the Siamese cats that you might see in modern day Siam which is Thailand, hence the name of this breed. Incidentally, you don’t see Thai cats or Siamese cats in Thailand nowadays. I know because my friend goes there a lot. You’d think there would be Siamese cats on the streets as community cats but no. What happened? Were they ever there in numbers? 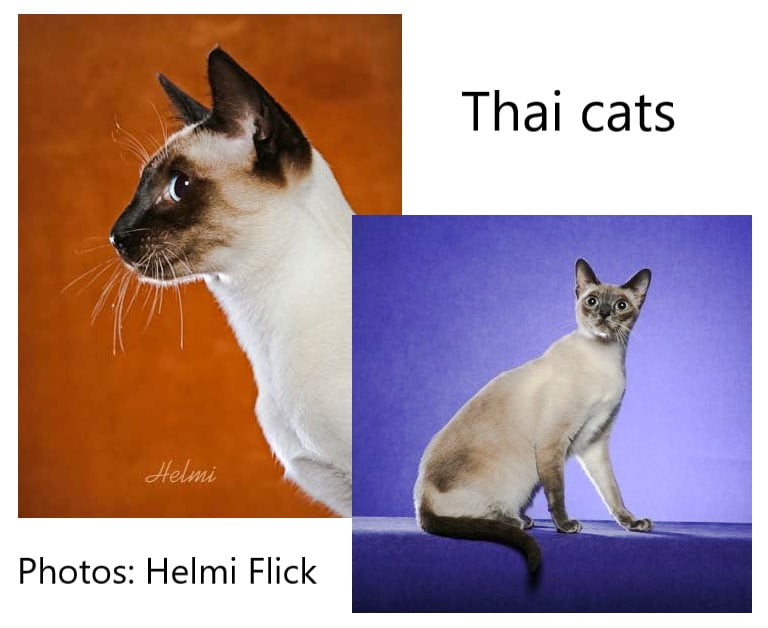 Thai cats. The cat on the left is called “Rock”.

What I’m referring to is that the original Siamese cat were standard looking cats with a pointed coat. They were actually very unhealthy, riddled with worms but they were fascinating to British people in the late 1800s when they are imported into the country. The modern Thai cat therefore looks a bit like the old style or old-fashioned Siamese cats.

Confusing range of types of Siamese

This introduces another problem with respect to the family of Siamese cats. You will see descriptions such as “Old-style” and “Classic Siamese” or “Traditional Siamese” or “Applehead Siamese” and so on. They all serve to confuse people who are not familiar with the cat fancy. I believe that the Thai cat was an attempt to pull all the loose strings together which muddied the waters of the Siamese cat family and present to the world the original, true Siamese cat as they relabelled it the Thai cat.

That’s my interpretation. Let’s not forget that the original Siamese was gradually made more elongated and slender over decades of selective breeding. This pulled the Siamese cat away from its original shape which was labelled “Old-style” Siamese.

The Thai cat was born out of a backlash from some breeders who recognised that the cat associations had decided that the “refined” but heavily elongated modern Siamese cat had become the norm. The breed standards had been adjusted to state that this overly-slender Siamese cat was now normal when it wasn’t because it didn’t look like the original Siamese cats. Therefore, the Thai cat was created to rectify this wrong.

I think that was a great idea. The only problem is that we have another name for a Siamese cat, namely the Thai. This is a Siamese cat but, as mentionedd, it may be politically incorrect to state that. Perhaps the Thai cat breeders want to distance themselves from the muddle of the gradual evolution of the modern Siamese cat and start afresh. They want to break free from this confusing history. I get that too and it makes sense.

Dr Cris Bird, president of PREOSSIA and chair of the Thai breed at The International Cat Association (TICA) added some information about the Thai cat breed and it gives me their perspective on the breed. The Thai cat should not be referred to as classic or traditional. The only correct name is “Thai”. This name is recognised by TICA and WCF.

You have to be sure that when you present photographs of the Thai breed that the cats are ones that are shown at TICA, WCF and GCCF shows. She says that breeders who don’t show their Thai cats are often non-authentic. There are quite a lot of cats described as Applehead Siamese that are also not authentic, apparently. Purchasers please beware.

To recap, the Thai cat is meant to be the authentic Siamese cat. In Thailand the breed is called the Wichienmaat and elsewhere the “Old-style Siamese”. TICA say that the breed closely resembles in 19th and early 20th century Siamese. They are correct.

In terms of character and coat types they are very similar to Siamese cats. They are just more regular in body conformation.