Photo added by Michael - My message to pro-delcawers: look at this photo and think of the pain -

No one with a kitten and a puppy would consider having the puppy declawed, so why do they think it is acceptable to cause the kitten pain and disablement by having him declawed?

Anyone who knows much about cats knows how brave they are, how stoic and how they hide their pain, because to them it is a sign of weakness. 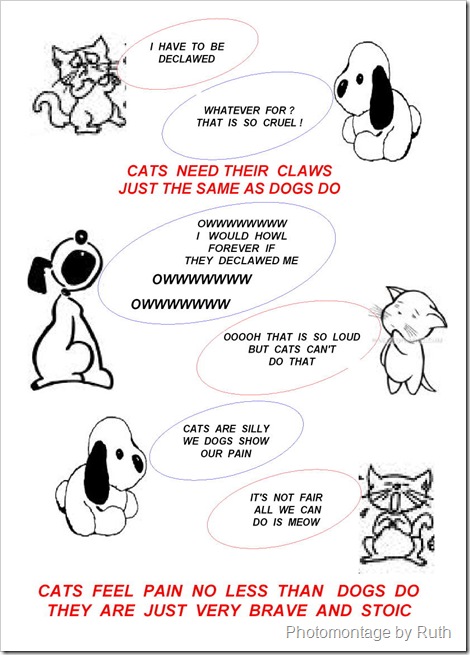 This quote from an ex vet tech shows just how much pain cats go through after declawing:

This cat had its surgery, as it was coming down off the pain meds (now mind you I was outside the building having a cigerette), I heard this horrible screaming. Sounded like a human, non stop, it was awful. I ran inside and everyone ran in the room where the cat was and it was chewing at its own paws (they were already bandaged up), blood everywhere. They had to sedate the cat and give it more meds for pain.

When it came down from that, it did it again. His poor paws needed stitched up, he tore them up with such pain he was feeling. They had to give him pain meds again and put one of those collars around his kneck so he could not get to his paws.

When the meds wore off again, he cried in such pain. So I just held him and petted him and talked with him, rocked him in the chair. The way he looked at me broke my heart.

And from someone else who heard a cat in pain after declawing:

I took my cat to the vet one day because she had a cut on her foot that turned into an abscess nothing too serious but I heard a cat crying the whole time I was there so I asked the vet what was wrong and he said it had been declawed.

He also made the comment that it was doped up on pain meds and still crying, he also made sure I knew he wasn't the one to do the amputation, the vet that owns the place did it, and told me he would never even think about doing such a thing to an animal.

I went home and cried, and every time I see someone on here asking about if they should get their cats declawed I get so upset and hope they read about it and know exactly what it is to declaw a cat.

Just 2 examples of the aftermath of the cruel unnecessary operation called declawing. For those cats, to show their pain that way proves just how extreme that pain was.

Please don't be fooled into thinking that laser declawing is kinder, it may not be as bloody as other methods and the wounds may heal quicker, but it is as much the painful amputation of the last toe joints and it still disables cats and causes them the same physical and mental problems.

What a pity that all cats in pain can't howl as loud and as long as dogs do because maybe then pro declaw people might realise that cats feel pain equally as much as dogs do.

The Agonising Pain Suffered by Declawed Cats to Declawing cats