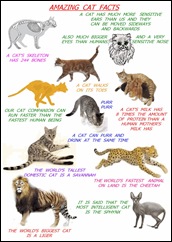 Click on the above thumbnail picture above to see a very large format picture that you can download and print for school work if you like.

Our humble cat companion is amazing. We forget this sometimes. Our cat is always there minding its own business, often asleep. But it can do some amazing things and it has some amazing talents. The wild cat is not far away. The wildcats are particularly impressive. Here are some amazing cat facts for children.

A domestic cat has eyes that are much bigger than ours when compared to the size of its head. If we had cat’s eyes they would be eight inches in diameter. What we can see in the middle of the day, a cat can see with the the same clarity in the dusky dawn and evening light. A cat’s eye has a “mirror” behind the retina to reflect and boost the light.

A cat’s nose is much more sensitive than ours. In fact it is twenty times more sensitive. Think what a cat can smell that we cannot.

A cat’s ears are much more sensitive than ours to high pitched sounds. And their ears can be moved sideways and backwards to pick up sounds better.

A cat walks on its toes. This allows it to move faster and more silently than animals that don’t. That includes us.

Nearly all our cat companion can run faster than the fastest human being, Usain Bolt.

The world’s fastest animal living on land is a cat: the cheetah. It runs almost as fast as a car on a motorway (freeway in America). See Usain Bolt vs Cheetah.

A cat can purr and drink at the same time!

When a mother cat feeds its kitten, the milk has eight times the amount of protein than the milk of a human mother – cat development.

The world’s tallest domestic cat is a cat called “Magic“. She is a Savannah cat that was born in Oklahoma, USA.

The world’s biggest cat is a Liger. This is a cat whose father is a lion and its mother a tiger. It weighs about 900 lbs. See hybrid cats.

It is said that the most intelligent cat breed is a hairless one called the Sphynx! This cat has long toes and behaves like a monkey.