There is something very appropriate about this photograph by Joyce Sammons of the now well known Furby in a Walmart bag. A feral cat who initially thought he was a Turkish Angora (TA) cat. He does have a bit of a look of a TA. Still, he is better being a beautiful feral cat now domesticated and loved.

Walmart is the world’s largest public corporation by revenue according to Fortune Global 500 (2008). Walmart sell cheap products and feral cats come cheap, they are throwaway cats. But my God they shouldn’t be. They are all beautiful, more beautiful to me than the most beautiful purebred cat. 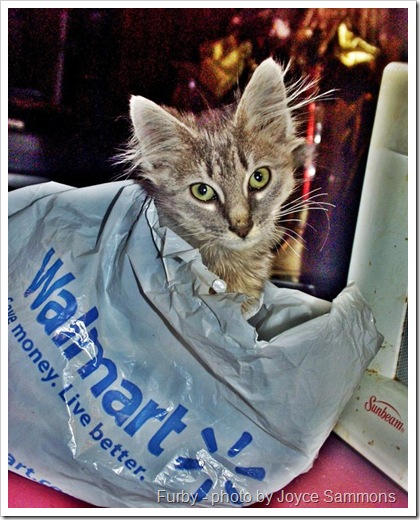 Furby has been digging around with his nose – see the little indentation on the end of his nose. A stray that I named Timmy has the same slightly scuffed up nose. It’s all that nosing around checking up on stuff.

Where did Furby get “ear furnishings” as glamorous as that? A lot of cat breeders spend ages getting ear hair like that (
for the right cat breed of course – think Maine Coon as an example). Maybe he thinks he is a Maine Coon? Nah, he is too little.

All I know is that he looks fantastic and he is loved. The latter is more important than the former.

And it’s another great picture of a cat, just the right place for it on Pictures-of-Cats.org.

Photo of logo: Use of the logo in the article complies with PoC non-free content policy, logo guidelines, and fair use under United States copyright law as described above.