Intro: this is a ‘reprint’ of a page on big Maine Coon cats I wrote about 6 years ago. It was on the blogger subdomain and received 490,000 views. That is a lot for one page on Google Blogger. Those were the easy days. The page is rarely seen nowadays so I thought I’d redo it here. I have added some more recent photos.

The big Maine Coon cat (MC) is very impressive and the biggest purely domestic cat in the world (I am excluding the wildcat hybrids) but not all Maine Coons are huge. The MC is also the largest native American purebred cat. I suppose that is obvious. Sometimes people think that Maine Coons weight 30-40 lbs (13.5 to 18 kgs). This is not true. One breeder says that the average female MC weighs between 8-12 pounds and males weigh up to 18 pounds. These are cats in good condition.

Obviously fat MCs are sometimes going to weigh 25 lbs. The shaggy fur covering a long lean body probably adds to the impression of size. Also when you compare them with some of the svelte, slender and slight modern oriental style cats they look enormous. I am thinking of the Oriental Shorthair for example.

It can take 4-5 years for an MC to reach maximum size. The factors that dictate size are genetics (selective breeding probably played a part here too), diet and exercise! Intact males (not neutered) are more likely to achieve higher weights in meeting the cat’s full potential due to the contribution of the cat’s hormones to his development. By contrast a male cat that is breeding may have reduced coat density making him look smaller.

Other than selective breeding since the late 1800s to the present (the duration of the cat fancy) what makes the Maine Coon so big? Well this cat is not as big as people think as mentioned. Secondly, if the Maine Coon originates in ships cats imported from Europe about 400 years ago, these cats were probably large in the first place and then they developed/evolved naturally as farm cats. The farm cat/mouser lifestyle probably lead to the natural selection of larger cats. 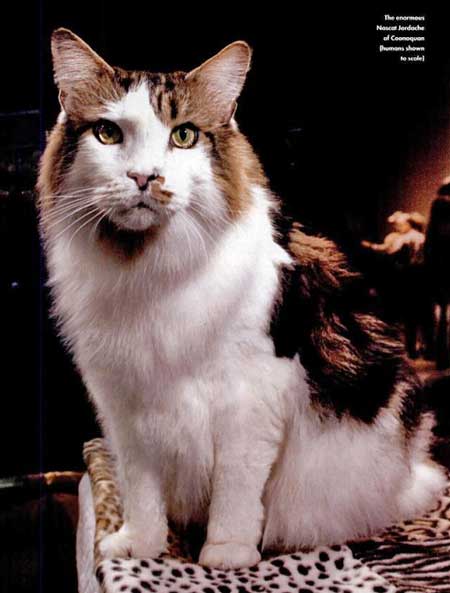 Jordy the 5 year old Maine Coon above, full name: Nascat Jordache of Coonoquan was featured in the Atlanta Magazine in 2007. He is a 25 lb Maine Coon. He was a national champ in 2004. Does be look a little bit overweight? Apparently he has a very laid back character and looks regal. He does look docile and well mannered in this picture. 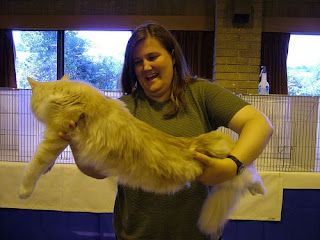 Photo above: The judge said the cat “unfolds” indicating that Maine Coons are long and flexible more than simply big. Many breeders testify to their MCs being 5 feet from nose to tail (about 1.5 meters). Remember the world’s longest domestic cat: Stevie, a renown Maine Coon who died recently. I think there are many other Maine Coons who are longer to be honest.

Photo above: His name is Shooter. I think he is the biggest Maine Coon I’ve seen – photo is copyright wendyophoto – this is a very impressive photograph. Wendy says, “This HDR was made from a single RAW photo taken at ISO 1600”. See this image in large format. See also a lot of Maine Coon cats and great information. 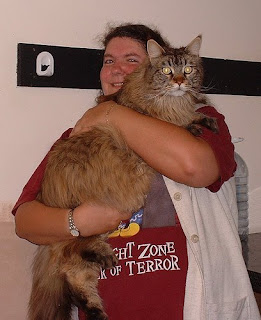 There is a certain fascination with big animals including cats. In the UK there is the perennial sighting of the escaped big cat roaming around some parkland or farmland in the dusk. We never see evidence other than a poor quality picture. There are supposed to be dozens of wild beasts in England and someone I recall is setting up remote cameras to try and get that elusive evidence. Some think they might be large feral domestic cats. People do tend to exaggerate what they have seen.

In the same vein there is a fascination about the Maine Coon cat’s size. We know that this breed can throw up some big cats but they are not all that big normally, as mentioned. And in any event, if we are to compare cat breeds we should look at the average weight of male and female cats of each cat breed. The averages are much less than the one off large male.

All that said the Maine Coon is the largest cat breed if you’re talking about CFA registered purebred cats. TICA register more cats and some are wild cat/domestic cat hybrids such as the Savannah and an F1 or F2 Savannah is bigger than a Maine Coon normally. The world’s tallest “pet cat” was Magic an F1 Savannah of great presence. 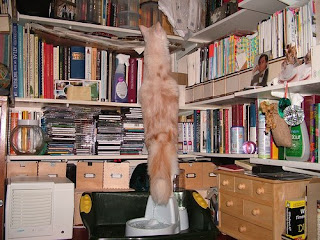 You’ll get some oddities caused by an illness and you’ll get some very fat cats. These are larger than normal but not for the right reasons. It is, I feel, rather pointless to isolate large domestic cats that are large because they are overweight or ill. Worse it is a kind of freak show.

One classic way of breeding larger domestic cats is through hybridization with wildcats as they are sometimes but not always larger than domestic cats. In fact I made a comparison between the large domestic cats and wild cats on the page linked to above.The Savannah is the classic large domestic cat/wildcat hybrid at F1-2 level. The thing is, it is impractical to have domestic cats that are large beyond a certain threshold as keeping them requires special arrangements. In addition breeders need to breed the wildcat hybrids back to domestic cats for character. You can’t really live with a wild cat in the house. This automatically reduces the size of the cat.

Abnormally large domestic cats of any breed including the Maine Coon is unlikely to happen because selective breeding over the years has dramatically narrowed the gene pool. Purebred cats often have a high Coefficient of Inbreeding as breeders search for the perfect appearance. This limits the occurrence of oddities in regards to size.

Apparently a Maine Coon has been 49 inches in length, that is about 4 feet. That said Maine Coon cats are actually long rather than purely big. So a big Maine Coon cat will be very long and this is amply demonstrated in the pictures. The so called “world’s longest cat” is Maine Coon called “Stewie”. 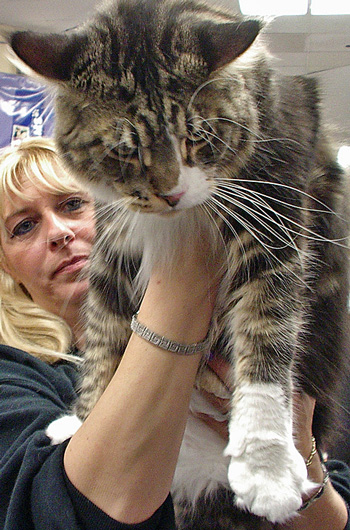 Photo above was taken at a CFA cat show. Tabby-and-white. Photo by semarr

Each picture on this page have been selected as showing a big Maine Coon cat with something to scale by (except for Jordy! but his weight is recorded as correct). It is for that reason I am showing people where possible as well as cats in the photograph. 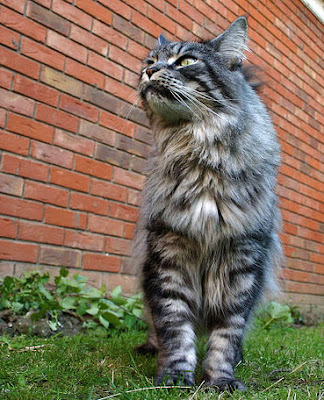 Here is another big Maine Coon cat being shown off for his or her size: