What is the current situation regarding the bobcat? And how do we find out? The organisation charged with keeping up to date with developments in the world of the wildcat is the IUCN Red ListTM. Their role is to assess the status of species of animals of the world. “Status” to me means the current situation regarding population, range (distribution) and threats to the existence of the species on the planet.

What do they say about the bobcat (Lynx rufus) in 2012? The answer may interest Americans as this is the most populous wildcat in the United States covering most of the country except for a “central hole” adjacent to and to the south of the great lakes bordering with Canada.

Classification – status in the wild

Firstly, it is still classified as “Least Concern”. That means what it sounds like it should mean. Least concern is the softest classification in terms of threats to survival in the wild. The only classifications above this are: Data Deficient, DD and Not Evaluated, NE.

The latest assessment was first published in 2008 and the assessment before that was the same and in 2002. There has been no change in twelve years. The situation is stable regarding the bobcat’s “conservation status”.

A major factor, it appears, in this assessment is that the population of the bobcat has remained stable. Or at least it is currently stable. The Red List says that in the 198os the estimated population was 725,000 to 1 million individuals. However there have been no subsequent formal estimates as to numbers. In 2007, the governments of the United States and Canada considered that the bobcat population was increasing. We are not told how they came to that conclusion.

The bobcat has adapted to a wide range of habitats reflecting its wide range:

The range covers Canada, USA and Mexico. I made the map above in 2009 based on the Red List map. Comparing it now with their 2012 map shows no difference. It seems that the bobcat’s distribution is stable too.

In the south-west the habitat is desert and scrubland. In the south-east its habitat is coastal swamp. In the north it is mixed forest and “boreal coniferous” forest – see picture below: 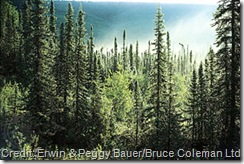 The bobcat does not like land that has been heavily cultivated. The chosen habitat provides cover, suitable dens and prey (rabbit and rodent). Sometimes the bobcat attacks large prey such as young deer (ungulates – an animal with hooves).

2012: This is assessed at 48 per every 100 square kilometres in Texas to less than 9 per 100 km2 in Idaho. We are told that you are more likely to see a bobcat in the south of its range than the north – excepting Mexico where the density is low at 5 per 100 km2

Hunting the bobcat and habitat loss

The above are the two main threats. The USA government authorities do not consider hunting the bobcat a threat to its survival at 2012. Despite their assessment this species is protected under CITES Appendix II. This means that trade in pelts is strictly regulated. The US wants the bobcat declassified and the regulations lifted. CITES have refused. At 2012, the bobcat skin is the most traded of all the wildcats. The USA is the biggest exporter.


The big question is this: is the population of the bobcat at 2012 really stable or are the figures being massaged by the US governmental authorities due to lobbying by the hunting fraternity? You can make your own mind up on that but we will eventually find out if this is happening.