Timmy our stray cat after a session with a catnip toy

This is a look at the cat drugs of catnip and matatabi from a slightly scientific point of view. Catnip is well known and the Japanese matatabi hardly known at all.

I have made one or two earlier posts on catnip: Catnip Video and What Does Catnip Look Like? 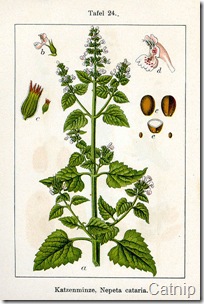 It is said that cats can become addicted to hallucinogenic drugs. I am not sure if this true. I am yet to see a cat addict and have never heard of one!

Catnip is a mint like plant that contains the chemical nepetalactone. The scientific name for catnip is Nepeta cataria.

A cat “trip” induced by catnip results in the cat doing the following in this order:

Trips lasts no more than 15 minutes with a one hour readjustment time afterwards. As far as we know no permanent brain damage is caused. It seems that overdosing or prolonged use can be detrimental.

When catnip is taken internally it acts as a sedative. The Japanese plant Actinidia polygama (also known as the Silver Vine) contains a chemical that is used to sedate lions in zoos.

The first reports on the attraction of catnip to Felis catus (domestic cat) were published well over 200 years ago.

In the USA a company applied for a patent to use catnip as a “palatability enhancer”. Another example of how commercial cat food really is all about money. 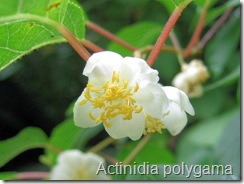 The name matatabi is name for the plant Actinidia. This plant is found from East Asia to China and Japan. It is a deciduous shrub growing on the edge of streams.

The chemical contained in this plant is also attractive to cats. It is also used in Chinese folk medicine for pain control, as a tonic and for rheumatism. The chemical is cyclopentanoid monoterpenes like iridomyrimecin (Reference 7

Cats respond to this plant by:

Accordingly, it is effective in gathering in feral cats. I am not sure if it used by cat rescue teams to gather in and trap feral cats. However as a lure it would seem to have been considered (or actually used) by animal control teams to capture and poison feral cats (Reference 5

). The bait being a mix of matatabi and a poison.

) being more effective than:

The cat drugs of catnip and matatabi - Pictures:

The Cat Drugs of Catnip and Matatabi to Cat Facts