↓
Home→Uncategorized→The Cat That Refuses A Name

The Cat That Refuses A Name

Okay, so our cat was an abandoned cat by our neighbor. We first spotted her when she was sitting on the steps of said neighbor's house. I instantly fell in love with her. She looked like a miniature lynx.

Bonus points: I was and still am not deathly allergic to her (or her kittens for a fact). So when our neighbor moved she couldn't take the cat with her to her new home and had put her out. She instantly started following me around the neighborhood.

I went to the library and she waited patiently outside for me. So after about a week of following me around I decided to take her in. Me and my mother tried naming the cat. At first we kept calling her kitty and she gave us what I call the 'foolish human' look.

So it was a no to "Kitty". Then we tried Buttercup. Blossom. Bubbles. (I was a powderpuff girl fanatic as a kid). Mia. Bella... So then I just settled on "Cat", simply because she wouldn't respond to any name.

So my cousin Demetria decided to visit us one day and the family calls her Meechie or Meech. Every time we call Meechie the cat would come running to us. So we decided on Meech for her name. We bought her a name tag and everything. Now she won't respond to her name. I know she's not deaf. I just think she likes to mess with me.....

Update: The cat that refuses a name part 2 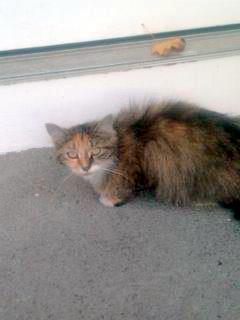 Meech and the it wasn't me look

Okay here's an update on Meech. I think she is playing games with me. I called her Meech. Constantly. But now my cousin Brooklyn came and she responded to Brookie. He looked at me and said (imagine this with a English accent

"You uncreative dork. I can't believe you named your cat after me!"

Then when I tried to explain that the cat's name is Meech, I swear she smirked at me. Yes my cat is playing games with me. Not cool. Not one bit...

The Cat That Refuses A Name to Moggie cats