NYC feral cats are from Dutch stock and they have a different genotype to New England cats of English stock. Pic in the public domain.

When people move home, they take their cat companion. This has been going on for thousands of years. It is how the domestic cat has spread throughout the world. For example, the Romans did quite a bit of empire building and moving which meant exporting the domestic cat far and wide. The first domestic cats of Britain where Roman cats. The British Shorthair is descended from these cats. 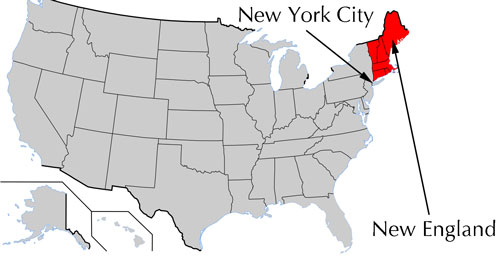 The cats of the city of New York, however are different. You may know that New York was once called “New Amsterdam”. The city was founded by the Dutch in 1626. It was a Dutch colony until taken over by the Brits later in the 1600s. As can be expected the cats of New York have a close genetic affinity with the cats of Amsterdam in Holland. There are four New England cat populations that are similar to the cats of NY, however.

The people of New York have Dutch cats! Apparently, there are fewer ginger, tortoiseshell, calico (tortoiseshell and white) and long-haired cats in New York than in the surrounding areas.

There are more piebald cats in New York than in neighbouring areas. Piebald cats are solid colour and white cats.

And there are no polydactyl cats in New York City. Is that true? Interestingly just down the coast in Maine, the Maine Coon that originates there is known to be predisposed to polydactylism (more than the usual number of toes).

I have read, though, that Boston is the original place of origin of the Maine Coon in the US. The lore of the area is that English Puritans brought polydactyl cats on their ships to Boston during the mid-1600s. The offspring of these cats are then believed to have travelled on trading ships from Boston to Massachusetts, Yarmouth, Halifax in Nova Scotia where you will find a higher-than-normal incidence of polydactyl cats.

You may know that they were brought on ships from England because they believe that the extra toes meant that the cats were better sailors! They can keep their balance better on-board ship. That is probably a very simplistic theory but it sounds nice in any case. And sailors thought they were lucky and better mousers.

One website states that Boston, Massachusetts has the largest population of polydactyl cats. Yes, I think Boston is the home of the polydactyl cat in America.

As mentioned, New York City was once called New Amsterdam. In 1664 the English renamed it ‘New York’ after the Duke of York when they took over the city.

Infographic on 5 facts about the Persian cat and Angoras

As Sarah Hartwell aptly describes it, this is a tangled tale. The Angora and Persian histories are intertwined. The Angora ...
Read More

Cats in Ancient Egypt – not what you think it was like

Introduction - the relationship between Ancient Egyptians and domestic and wildcats was not as rosy as you think Cats in ...
Read More