The first time people had cats was about 9,000 years ago.

People know this because when a cat died 9,000 years ago it was buried with its owner. This happened in Cyprus, which is in the Mediterranean Sea.

The people of Egypt about 4,000 years ago also kept cats as companions. At one time they worshiped the cat they liked them so much.

Since the first time the cat became a companion to a person there have been lots of changes.

There are now over 500 million domestic cats in the world. It is probably the most popular pet. This is about the same as the number of people in the United States of America and South America added together!

The first tamed cat was a tabby cat. The tabby cat is still the most popular type of cat in the world. A tabby cat has spots or strips or a swirly coat.

Here is a picture of a striped tabby cat: 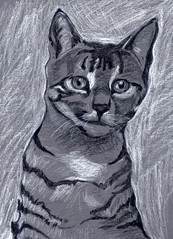