This dumbass redneck who likes to shoot feral cats misspells ‘feral’ so badly it is a bit of shock to realize how uneducated he is. When holding up a feral cat he has shot, he says “Gettin rid of some Ferrell cats”. He even capitalizes the word. There are houses in the background. This could easily be someone’s domestic cat. 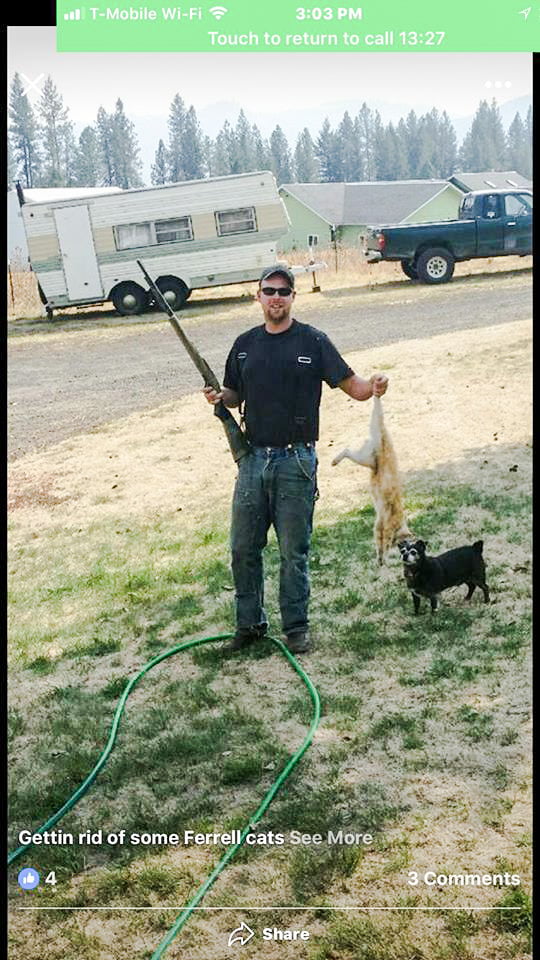 Jesse the dumbass holding up his ‘Ferrell’ cat for the camera.

His name is Jesse Winterringer. He likes to cut down trees too. Perhaps he does it for a living. But for pleasure and as a pastime he likes to kill animals with his rifle. And that includes cats. He thinks he is shooting feral cats but he fails to question whether he is shooting someone’s pet cat roaming around the neighborhood. It is of no concern to him. He is so involved in the blood sport, he is blinded by the possibility he is killing a companion animal and causing pain and distress and possible emotional pain and upset for the cat’s owner.

In another photo, Winterringer appears to be shooting some cats in what looks like suburbia. He holds up a ginger cat by the hind legs. In the background is cut grass and a paved path. This is not the wild either. 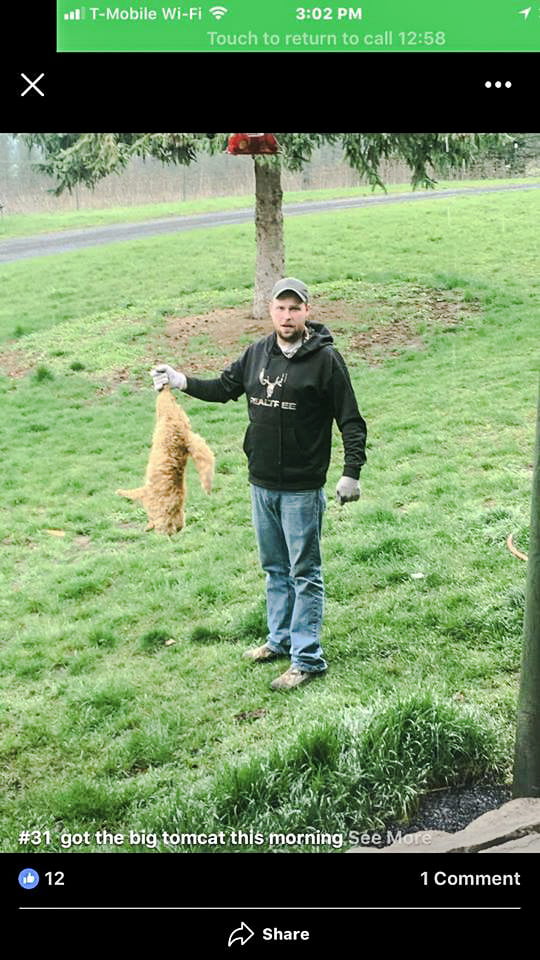 He shot a ‘tomcat’. Looks like suburbia. The cat could easily be a stray domestic cat.

You dumbass! You can’t even spell feral correctly!

“I don’t even like cats, but it takes a very disturbed person to do something like this and then want to “publicly display his trophies”. However, maybe he was intending on feeding them to his family, so it all makes sense then.” 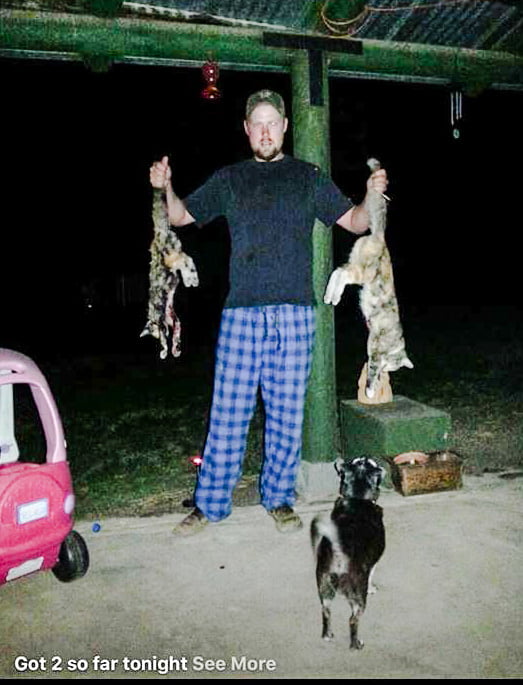 He got 2 that night. He is in his garage. Are these domestic cats?

Is it legal to shoot feral cats in Idaho?

Obviously Mr Winterringer thinks it is legal to shoot cats in Idaho (feral or otherwise). But is it?

A supporter, Tanner Smith, of this dumbass redneck who likes to shoot feral cats says the following on Facebook:

“It isn’t illegal or “animal cruelty” in the state of idaho to shoot feral cats. Sorry that yall from spokane are so damned nosey and can’t stop pushing your narrative without hearing the other side or counter argument…”

Here is another supporting comment from Tanner Smith a fellow dumbass:

Well Mr Smith you’re wrong. It is clearly animal cruelty and as for the legality of it the answer is not that simple. You only have to visit the Idaho Dept. of Fish & Game to see what they say about the legality of shooting feral cats.

They don’t know! They say it may be legal when protecting livestock. But you’ll need a license to shoot feral cats in the wild. However, you’ll have to be sure that the cat is genuinely feral and unowned because if you are wrong you could be sued in the civil courts and prosecuted in the criminal courts. And if you ignorantly post photos holding shot cats on Facebook as Jesse Winterringer likes to do you are asking for trouble. And I hope he gets it because it is the face of ignorance and mindless cruelty.

From a legal standpoint there are so many pitfalls to shooting feral cats that it is simply foolhardy (and obviously cruel) to do it. There are ordinances regarding discharging firearms in city limits and county laws as well. Fish & Game cannot provide a definitive answer as to whether it is legal to shoot feral cats. Therefore don’t do it.

I have written many articles on the illegality of shooting feral cats. In phone conversations, some Fish & Game Departments say categorically that it is illegal. And the main reason is because you don’t know what you are shooting. This dumbass redneck who likes to shoot feral cats doesn’t get that.

P.S. Winterringer also likes to shoot bobcats. He is an unpleasant person.

Winterringer proudly displays his dead bobcat for the camera.