I am planning on getting one of these amazing cats if its the last thing I do! However my state has put a ban on all hybrid canids and felids (for Savannahs, F1,F2, and F3 are prohibited).

Does anyone know if there is anyway around these laws and/or way to change them? I really don’t see a reason to ban hybrids at all. Here are the qualifications for animals other than hybrid dogs and cats:

1. Accidental release will not adversely affect the ecology of Massachusetts;

2. The animal in captivity, or if escaped, poses no substantial danger to humans, either from injury or disease;

3. Proper care of the animal is no more demanding than the care of common domestic animals; and

4. Trade in the animals has no significant adverse effect on the wild population of the animal in any of its natural habitats.

Since at the very least hybrid cats do not pose a threat to any of those qualifications, why then would they be banned?!

Anyways, even if there is no way around it, I intend on having one, the state just doesn’t need to know!

Hi… thanks for visiting and asking. I understand why you are anonymous!

I live in the UK but know a bit about this. The laws concerning the keeping of wildcat hybrids differ from state to state in the USA and from country to country, in fact. In Britain the government department responsible DEFRA has decreed that you need a license to keep high fillial wildcat hybrids born from certain wildcats and this is enforced by local authorities (county councils). This is nationwide. Australia has banned the importation of Savannah cats. The reason the Australian government did this was to protect their native wildlife. They have a large feral cat population and they feared that an escaped high fillial (F1 or F2 say) breeding Savannah cat would become a super feral cat and father many more super feral cats that would decimate native species. I felt that that fear was unfounded.

I know that New York, Massachusetts and Alaska (I think) are at least three states with rules on keeping wildcat hybrids. I think Massachusetts is one of the strictest in relation to the keeping any wildlife.

I think there is a gradual tightening up of regulations regarding the keeping of wild animals and hybrids in the USA. There are polarised views on this. The advocates and “owners” of wildcats say that animal rights people are causing this change. I don’t agree with that. It is more to do with conservation; an attempt at preserving native species in their own habitat.

The USA does have by far the greatest number of wild animal “pets” in the world. There are 4,000 captive tigers in Texas alone – more than the entire world wild tiger population. It could be argued that it has got out of control and perhaps it is the irresponsible owners of big wildcat pets etc. who have somewhat spoiled it for people like you who would like to care for a wildcat hybrid such as the Savannah cat – a great cat by the way. I have played with and photographed F1 Savannah cats and they are special. 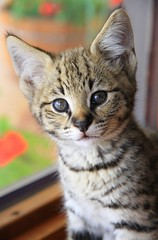 If I was playing devils advocate I could argue that you are a bit wrong in your assessment above.

The authorities would argue that “Accidental release will not adversely affect the ecology of Massachusetts..” is a factor with respect to higher fillial wildcats for the same reasons as outlined above in relation to Australia.

Also “Trade in the animals has no significant adverse effect on the wild population of the animal in any of its natural habitats..” may be relevant. The Savannah is fathered by a serval. The serval is a wildcat in Africa. Might there be importation of servals from Africa to become breeding cats in the USA? And might that harm the serval in the wild? Not sure but it is the kind of argument posed by the legislators.

As for your particular issues and questions, the question that I have is how do the authorities know if a cat is a wildcat hybrid? It is difficult to be certain from appearance alone. A large skinny spotted tabby cat could look like a smallish F2 Savannah cat for instance. Although I am stretching the imagination a bit.

But if the authorities are to successful enforce law they need a more solid test than appearance. I presume that this test is a DNA test. But I don’t know of a DNA test that can isolate one purebred cat breed from another. Or a DNA test that can distinguish between an F5 Bengal cat (which are considered pure domestic cats and are allowed in all states as I understand it) and higher fillial cats such as an F1 or F2.

The issues does turn on the whether the wildcat hybrid is F1/F2 or F5 and below. F1 = wildcat x domestic cat. While an F5 is five generations from the wildcat, with a low percentage of “wildcat blood”.

How is this tested? I am not sure. Someone might advise me on that knotty question.

There have been two cases on this website of wildcat owners who have fallen foul of state law on the keeping of wildcat hybrids. One concerns Motzie a famous F2 Savannah cat cared for by Deborah-Ann Milette. They lived in New York state. Here is one of Deborah’s posts on this subject: Jealous Cat Fancier Turns Motzie In As Vicious.

The other concerned the keeper of an Asian an F1 Bengal cat. I won’t mention names as the lady was very keen that I publish pages on this cat but then later on asked for the pages to be deleted as she discovered that in Massachusetts this cat was illegal. I should have known better. I knew this but had forgotten!

Deborah the keeper of Motzie moved from New York to Oklahoma, which is the state where A1 Savannahs is located. A1 Savannahs are fantastic by the way.

I believe that the lady with the F1 Bengal cat shipped the cat out of the state to another home, but I am not sure.

The major problem is this: the cat is in jeopardy. We as humans can take the risk of breaking the law. We might not get caught. If we are we might get a fine. The punishment for the cat, the close companion and friend of the person, is far more severe – it is death.

So the risk is too high. And I cannot, of course, promote the breaking of the law.

I hope this helps a bit. There are no clear answers except for an extreme one: move to a state where it is allowed. Of course laws change so even that might not work. You would be pretty safe in Texas though! They won’t even stop keeping tigers as pets…