This list is meant to present the most beautiful domestic cats in the world based upon an ancient mathematical principle, the golden ratio (see below). Believe it if you want to. Personally, I don’t have much faith in it when applied to domestic cats. There are various reasons which I discuss below the ranking table. One is that ‘beauty is in the eye of the beholder’. A very well-known phrase/saying indicating the subjectivity of beauty. Mathematics is objective. It eliminates subjectivity.

And another pertinent phrase is ‘there is no accounting for taste’. Both these concepts as expressed in well-known sayings are going to significantly undermine any supposed mathematical formula which decides what is and what isn’t beautiful. And humans don’t need a mathematically equation to tell us what is beautiful, neutral or ugly. Each individual instinctively decides for themselves. And there is no arguing about it because of the sayings mentioned.

However, if when you analyse human faces that people have decided are beautiful there is a common mathematical denominator: symmetry and well-organised features indicating good health. This is where the maths comes in. I discuss this some more below the listing.

Measuring the beauty of an animal mathematically. Good or bad? Bad for me. Image: All About Cats.

Ranking domestic cat beauty as per the formula

I have doubts about this method

I don’t have a lot of faith in this which is why I have put off writing about it. Although I am not totally against it. There is some value in it but it is limited when applying the golden ratio to cats.

The so-called ‘golden ratio’ has decided that the Norwegian Forest Cat is the most beautiful together with the Russian Blue. The method works on measurements; the proportions and distances between certain anatomical features. It doesn’t appear to take into account the coat’s colour and markings which are important features concerning appearance.

And neither, apparently, does the formula take into account the size of the cat. Size is an important factor in deciding attractiveness. The Maine Coon comes in at a disappointing ninth position. This is three places below the American Curl which is certainly less attractive than the Maine Coon which is probably the world’s most popular cat breed currently.

The point here is that this formula does not take into account the subjective beauty or ugliness of the curled-back ears of the American Curl (for instance). A lot of people, I believe, regard the curled-back ears of this cat breed as unattractive as they are unnatural. But this formula does not take this into account, it seems to me, because it is based upon the relationship between features rather than their actual shape.

The tailless Manx comes third. Well, a lot of people are not going to like a cat without a tail. These people like to see a more natural cat. But once again, this formula does not take into account a person’s point of view with respect to naturalness or unnaturalness. This is where a mathematical formula fails. It cannot take into account, and put into the equation, a human’s attitude with respect to nature and evolution. These are factors which colour one’s opinion about beauty.

Links to the opposite

Here are seven pictures of ugly cats and it is very sad. It is not fun or even interesting. I ...
Read More
The story of a cat called Ugly who taught a woman how to love

This is a story about an ugly stray cat who taught a woman how to be beautiful, to love and ...
Read More
When Does An Ugly Cat Become Attractive?

The abc News journalist, Stephanie Tuder wrote an article entitled: Meet Zeb, the Adorable Ugly One-eyed, Four-toothed Senior Cat. In ...
Read More
Why are some cats and dogs bred to be ugly? 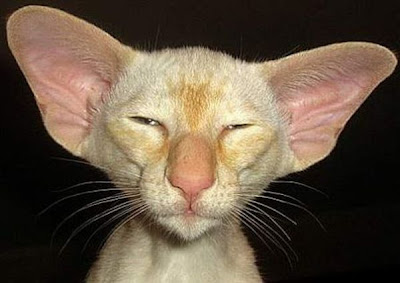 Why are some cats and dogs bred to be ugly? Answer: because (a) people want something different to make a ...
Read More

So what are the mathematics?

I agree, in principle, that there is some mathematics (‘math’ in American) behind beauty because our attraction to other people is dependent to a certain extent on how symmetrical their faces are. And if the face is in proportion. Symmetry in a face is indicative of health. The opposite sex wants to mate with healthy individuals in the interests of survivability.

Leonardo da Vinci’s “Vitruvian Man” it is claimed has the ratio of the following distances as the golden ratio. Foot to naval: naval to head equals 1.618:1. This is the basis for working out the attractiveness of the cat breeds. Vitruvian Man apparently has a 1.5:1 ration 😢.

The people behind this assessment of cat breed beauty are using a formula designed for people and applying it to domestic cats. It’s probably viable to a certain extent but it disregards certain important factors, as mentioned, such as coat type and markings. Another ignored factor is the length of the muzzle.

Some people have a fascination with the short muzzle of dogs and cats which was created artificially through selective breeding. This is because it creates a more rounded face which is more baby-like.

Perhaps the problem with the formula is that it focuses on a frontal measurement as opposed to a profile. If I’ve got that wrong then please tell me.

The flat-face Persian or contemporary Persian comes at the bottom of this list with the Himalayan (pointed Persian). That is what I would expect and I’m thankful of it. Ironically, the Cat Fanciers’ Association have promoted for decades the flat-face Persian as an example of brilliant selective breeding and refinement of the traditional Persian cat. They think that they made the cat more beautiful. This is what I’m talking about when I say that beauty is in the eye of the beholder.

And, if we turn our minds to dogs. The most popular dog breeds during the pandemic, when there were lots of dog adoptions, were the flat-faced dogs such as the French Bulldog. These dogs have breathing problems as has the Persian but adopters put these health problems aside.

As mentioned, the Maine Coon comes ninth in this list despite being perhaps the most popular cat breed currently. And it is ironic that the cat associations insist in their cat breed standards which are guidelines that this cat’s muzzle needs to be very square and the ears very large. Perhaps these demands on cat breeders work against its mathematical beauty. This mirrors the flat-based Persian problem regarding attractiveness. Are the cat associations writing guidelines which make cats less beautiful to the average human?

In this study, in which they measured cat beauty, they photographed the faces of 46 well-known cat breeds. The photographs came from a stock photography service: Shutterstock.

Each photo of a cat’s face was then measured for its ratios between various features. These included the face length, face width. The distance between the top of the head to the pupils of the eyes and the pupils of the eyes to the mouth and the tip of the nose were also measured. And the outer corner of the eyes and the chin to the bottom of the mouth and tip of the nose were also measured. Yes, lots of little measurements to check for the distances between these various anatomical facial features. They ran the numbers through a “special golden ratio calculator”. This averaged the ratio score for each breed and then they ranked them according to how far this number deviated from the golden ratio 1.62.