The Old Woman and the Cat (Akka ja kissa) (1885) is a painting that I like very much and not just because it has a cat in it!

It was painted by a Finnish artist who was much revered in his time in Finland. He is Akseli Gallen-Kallela (26 April 1865 – 7 March 1931). I think that this was a two way love affair because his inspiration came from Finland and it seems practically no where else.

The painting is about 47 inches tall, so quite large (121 centimetres). It is of an old sheep woman. It was painted when Gallen-Kallela was 20 years old, still young. His father didn’t want him to be a painter but his father died when his was 14 and from then on he pursued his passion. It must have been obvious that he had real talent at aged 14 even. 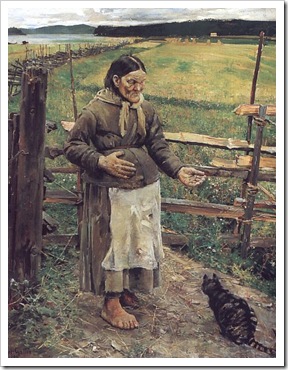 It is a very uncompromising picture. No punches are pulled and it is not glossed up to be acceptable to the subject or the people of the area who I presume saw it (perhaps not).

Gallen-Kallela (see picture adjacent) describes the lady as a “rustic being” with calloused hands and feet. It was this that interested him I suspect. The old lady is feeding the cat. But with what! It looks like she is tossing some food scraps to the ground. The pieces of food look light coloured. Perhaps some scraps of raw lamb or sheep! (but these aren’t light coloured). Perhaps fat therefore?

Apparently it was painted in the summer of 1885 in Salo, Finland. The woman was a local person. He half finished the painting and added the cat later when in Helsinki and then added the landscape background from sketches of a different place. Artistic license we call that!

So the cat was not actually with the old lady and perhaps not even being fed by her. Perhaps the cat lived with Gallen-Kallela or he simply saw it in the street in Helsinki (a stray cat).

The cat is a mackerel tabby moggie (mixed breed cat and see cat coats tabby – new window). It is very dark tabby cat and not that well painted, dare I say. Well, correction, the stripes are a bit too high in contrast and sharply defined, I think but the pensive and expectant position of the cat is exactly right. I like this painting: The Old Woman and the Cat (Akka ja kissa).

The picture is in the public domain and the photo published under Wikimedia Commons.