I’d like to talk about the RagaMuffin cat and the Princess. They are both the same. You see, if you believe that life goes on after death but in a different form then this gloriously attractive RagaMuffin cat was a princess in her former life. It must be the case judging by her beauty and distinguished bearing. Her former life as a princess must have been a privileged one and looking at her beauty it should have been. But nature has a way. And this very pretty female cat, called Café Mocha Valencia (great name) had it tough for a while in her life until she came home to a place where she is truly loved. Here is the story by the person who lives with her and loves her...Laura..:-

“Speaking of shelters... attached is my shelter cat Mocha's photo shoot with Helmi this past September at the TICA Annual..” Below is the video of the results of that shoot

Mocha's a Ragamuffin that I adopted from Purrfect Pals (new window opens), the shelter I volunteer with. I found out that she'd originally been a breeder surrender then went out to a home that dumped her at a kill shelter a year later. Thankfully her chip brought her back to our shelter.

Next family had her for about a year and was back and forth to the vet because she was peeing on the bed. Vet found nothing wrong with her - told them it was "environmental" and they finally said they "just didn't want to deal with it" and signed her over to be euthanized. Ends up the family had THREE children under six years old - all boys. Thankfully the vet thought to scan her for a chip as he knew they'd got her from a shelter and so her life was again saved. 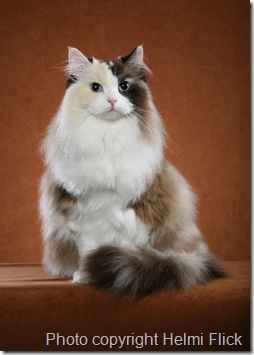 The vet called our shelter and let us know that one of his vet techs wanted to take her. Well ends up same thing with her - peeing on the bed - she had a three year old boy. So she brought her back to us.

When I got her in Mar of 2008 she was shaved into a lion cut - ridiculous since her coat doesn't even mat. She was absolutely TERRIFIED of little kids and though friendly to adults you couldn't touch her face, paws, tail or bend over to pick her up - she'd run and hide. Knowing this was probably due to the abuse, I just stepped back and let her come to me.

A few months later she was throwing herself at my feet. And after having her meet neighbours' kids and having them spoil her with chicken baby food she quickly learned that they weren't all horrible (though I'm not convinced LOL!). I started showing her in the Household Pet class part way into the 2008/2009 show season and she finished 2nd in the Northwest and 8th Internationally. Right now she's Best in the Northwest (with more than twice the points of the cat in 2nd!) and the show this past weekend jumped her from 9th Internationally to 5th.

She loves being shown and her shaved down coat has grown back in soooo gorgeous 🙂 She's also the most affectionate cat I've ever known. She's also featured on TICA's website - http://tica.org/public/hhp.php (new window). I can also now lay her on her back and clip her nails - with her trying to head butt me the entire time LOL ..Just thought you'd love to hear one incredible happy ending for a shelter cat 🙂 “

The RagaMuffin cat and the Princess – Notes:

Laura has her own book keeping business, Cascade Accounting and Tax Services, her own YouTube Channel.