It's Tuesday October 5th 2010 and it's been a hot night in Malta. I arrived on Monday and I went out to dinner with Martha Kane and her partner Richard Vella in the evening. Martha runs Kitty Appeal, her cat rescue organization from her 14-room home in part of the old town of Sliema, Malta. She has been rescuing, feeding, trapping and neutering the feral cats of Malta for 40 years. Yes, you read that correctly - 40 years! Currently she has over 50 rescued cats directly in her charge at her home. The house is given over to the rescued cats. Martha and Richard fit in around the cats. And there is a tame pigeon and sparrow too. They all cohabit contentedly. And everything is nicely in order.

Before we had a splendid dinner by the waterfront, Martha and Richard had some work to do. You guessed. One of a number of feral cat colonies that Richard manages is on and around the building site of a large block of apartments.

One of the cats, a wily one, had somehow climbed to the seventh floor (she ended up on the 4th)! The apartments building is just a shell. Richard and Martha had already tried to trap him without success. Sympathetic people in the block opposite had reported seeing him on the fourth floor. So, Monday evening Richard entered the block with a trap and some bait and tried again. We went back after dinner but no luck. On a previous occasion the cat had gone into the trap eaten the food and left the trap! Richard will return today at 4 am to check again.

Martha Kane and her partner Richard are involved in heroic work on a day-to-day 24/7 basis despite many obstacles.

Richard at home with "Speedy" (left) and "Cetta"
- they are best mates. See the pic in the comments too.

Martha has a debilitating illness called fibromyalgia which is like having bad flu 24/7. It is a medical disorder characterized by chronic widespread pain and a heightened and painful response to pressure. Richard works full-time in the insurance business. Despite this they mop up and patch up the feral cats of Malta with courage and dignity. There are others who do similar work. There is a network of about ten individuals. These people work entirely independently but are aware of each other's activities. However, I think it fair to say that Martha Kane is the person in all of Malta who is known as the cat woman; the woman who truly helps feral cats in a totally altruistic way, which is imbued with lashings of unconditional love. 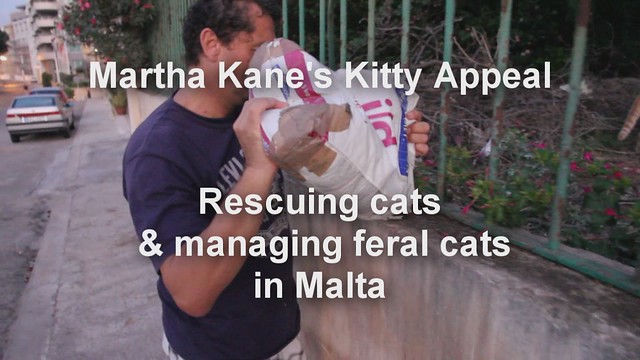 I am extremely impressed with Richard too. As I said he works full-time in the insurance industry. He is Maltese and speaks excellent English. He still finds time to feed, trap and rescue feral cats that are desperately in need of his assistance. This can mean working at some very unsociable hours such a 4 in the morning and worse. He drove me around at night after the dinner to show me a couple of his feral cat colonies. One was in a large deserted house in a posh district of Sliema. It is tough work feeding and caring for feral cats because you take responsibility for them but cannot control their lives. You are bound to experience some agonizing moments. In this case the large house that is a home to this colony is on a road that is dangerous to cats. One a number of occasions he has taken it upon himself to pick up cats killed by cars. This is heartbreaking work. He has asked the local authorities to put traffic calming structures on the road without success.

Martha is Irish, English and Maltese! She speaks perfect English of course but her Maltese is also perfect. She has masses of courage, determination and commitment. And helping the feral cats of Malta demands that.

I meet her and Richard at the house today. I met "Speedy", a remarkable purebred cat, rescued cat, who suffers from an inherited propensity to urinary tract disease, that lead to blockages in the urinary tract. She calls this cat, The Sex Change Cat! I have never heard of that before.

She has cared for this little fellow for a long time. His condition was serious and recurring. The prognosis was to euthanise. This is not Martha's syle of doing rescue work. Eventually it was agreed that his penis and part of his urinary tract be removed and an opening created to allow the better passage of urine. Wow! He has lived long and prospered under the close and tender care of Martha Kane.

Between them Martha and Richard also manage 8 feral cat colonies! This is big and responsible work.

How long can this excellent work go on for? The supply of feral cats despite Martha and Richard's work is not drying up. Martha is not getting any younger and she fears that as her condition worsens and funds run out, she may not be in a position to go on taking care of her beloved cats. Martha, though, is a fighter and will, I sense, never give up or stop as long as she has the strength.

I'll revisit this subject tomorrow. Today, I met a good percentage of the cats who live with her. I will be posting some of those photos soon. They have a good life, as you would expect. Here is one of a recently rescued cat - the frightened eyes:

Until next time from Malta...Malta incidentally is a small island with a long history just south of Italy bang in the middle of the Mediterranean sea.

The abandoned villa featured in the video above that was the home of a feral cat colony managed by Richard is now being redeveloped. Their home has been destroyed. We are responsible for feral cats and the developers had a duty to deal with them humanely, I argue. Here is a picture of theb vill; before and after. They were not taken at exactly the same spot but you can see what is happening:

The Rescue and Feral Cats of Martha Kane to Feral cats