The screaming of the mice. I can’t forget it. It’s a scream that they make at the moment of their death. It is loud enough to be heard by a person five metres away or more; a clear, piercing sound. A full-stop to life. And this, despite the fact that the sounds of mice are often inaudible to people but highly audible to domestic cats.

Like many or most indoor-outdoor cats, my cat brings in mice. He brings them in living and struggling. He likes to go underneath my bed, where there is plenty of space to devour them. He may have played with the mouse beforehand but he will end up underneath my bed when I’m sleeping in it. The time? It’ll be between 2am and 4am in the morning, normally. He’s a night hunter, crepuscular and deadly. I might be awake, and I usually am. I know that he has a mouse because of the sound of his activity when chasing and playing. He also vocalises his excitment.

The chase goes on for a while. It may extend to different areas of the home but he’ll usually return to the space under my bed. This is his den, a safe space, a ‘scent soaker’ in the words of Jackson Galaxy. Which is why he may kill a mouse about two feet from my head and it is disturbing. I know the sound of the scream a mouse makes the moment it is being killed by the jaws of my cat.

It is an aspect of domestic cat guardianship which disturbs me. I know a lot of people have the same concerns about their cat bringing in prey animals, dead or alive. It is a major aspects of ‘cat ownership’ which we could do without. It’s a reminder that we live with a highly efficient and psychopathic predator. That’s not to be critical because it’s natural. But there is no sense of responsibility about the death of another creature when my cat dispatches it. Of course, there isn’t because it is completely natural to kill without compunction and without feeling. 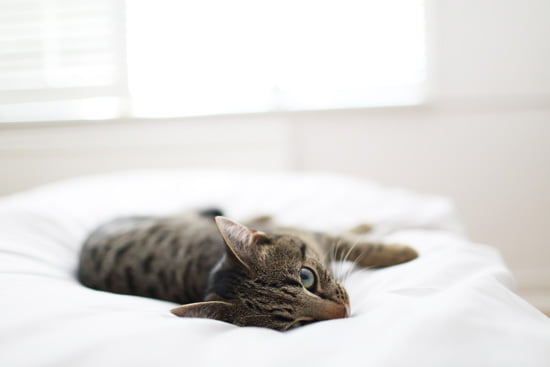 Gabriel – Gabs – Gabby. This is my cat. Photo: Michael at PoC.

A cat chasing a mouse is the classic "predator hunting prey" but, hey!, it can be a rat chasing a ...
Read More
New Zealand news media reports that one feral cat regurgitated 28 whole lizards! True?

NEWS AND COMMENT-NEW ZEALAND: The website stuff.co.nz have published an article in which they attack the feral cat, which I ...
Read More
Do cats attack bats?

Alternative questions to the title are (1) do cats hunt bats? - and (2) do cats eat bats? They are ...
Read More
Do you stop your cat coming inside when she has a mouse in her mouth?

The photograph on this page was taken by the boyfriend of a woman who is the caregiver of a grey ...
Read More

Gabriel won the competition between himself and my computer.

We have to accept this and of course we do. My cat will eat a mouse in about 60 seconds once he has decided to stop playing and start eating. The whole grisly process, from bringing in a mouse in his jaws through the cat flap to jumping up onto my bed for a cuddle after eating it, pivots around that ghastly moment: the screaming of the mouse as it succumbs to the terror of my lovable and darling domestic cat companion.

It is a reason why domestic cats should be kept inside at all times. But another reason why they shouldn’t is because this is nature. Humans shouldn’t be bothered about mice screaming in agony at the moment of their death. We watch television on the Discovery Channel and see Sir David Attenborough present the most grisly film footage of animals killing animals. When it is brought home and the killing happens two feet away while you’re drowsy and sleepy; that’s another matter. It’s a reminder of how cruel the world is.

It’s a reminder that we live with an animal that is wild at heart. A predator who let’s that wildness express itself sometimes and then turns on a sixpence to become a cuddly companion. He wouldn’t hurt a flea by the look on his face. But that scream hurts me.