This concise posting on The Social Organisation of Serval Cats to Serval Cats must start by saying that servals are solitary animals although occasionally they are seen together (as a mating pair) or as a family unit (mother and kittens)2. This page might and should interest people who keep servals as pets. They are living with a medium-sized wild cat species. When I took the photo below, I felt intimidated. I had signed a disclaimer with the breeder in case I was harmed 😒😊.

Male serval, Morpheus, hissing at me as I entered his enclosure. Image: MikeB

The best way to present some of this information is in a table: Home ranges, density and scent marking.

Scent marking increases markedly under certain social conditions. For example, when the female is in heat (estrus or estrous) a high rate of scent marking took place for both male and female servals in captivity. See Reproduction and Development of Serval Cats.

When a young male travelled through the territory of a “resident male” (a male who has found his own home range and settled there) the young male scent marked much more frequently raising the number of scent markings from 2 per hour to 10 per hour.

Servals also mark by scrapping the ground and leaving faeces on the ground. It is unclear if, like some wild cats, servals use areas as toilets to mark territory or whether they defecate randomly.

Servals use similar vocalizations to domestic cats and more, including:

See and hear cat sounds generally. Although servals are not recognised as fierce fighters, they seem to be very adept at displaying aggressive postures, which are very much in line with those of domestic cats.

During stand offs with other servals, the ears are flattened against the head, almost squeezed against the head to protect them and display the white bar/spot, which can’t be seen in the photo below (a still from a video). 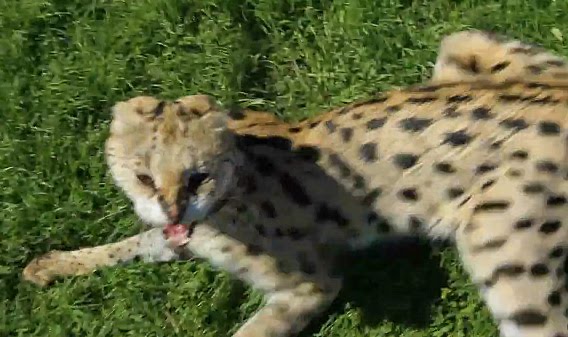 Here is the video in which a serval displays aggressiveness towards me because I provoked her. The postures, sounds (hiss) and “long-reaching slashes of the forepaws” are typical1:

Here is a page from Johnathan Kingdon’s book on East African Mammals: An Atlas of Evolution in Africa, Volume 3, Part A: Carnivores

that describes the aggressive posturing and the special vocalisation referred to above:

2. The source material for this page comes substantially from Wild Cats of the World

by Mel and Fiona Sunquist.

Below are some more pages on servals.

Are servals legal in British Columbia?

The answer is slightly complicated, indeed a mishmash. Servals are not in the Controlled Alien Species (CAS) list for the ...
Read More
Are servals legal in Washington state?

Yes, servals are legal in Washington state for individuals to own and possess. You don't need a permit either on ...
Read More
Is it legal to own a serval in Virginia?

Provided you have a permit it is legal to own a serval in Virginia. The state rules on exotic animal ...
Read More
Are servals legal in PA?

I'm referring to the ownership of a serval by an individual living in Pennsylvania, USA. Is it legal? The answer ...
Read More
Are servals legal in Georgia?

It is illegal for individual living in Georgia to own and possess a serval without a licence or permit. I ...
Read More