I would like to talk about a wonderful television program on the BBC about the tigers of Bhutan. But was it irresponsible? And where is Bhutan? That is the first question, in fact. It is one of those, "top of the world" countries sandwiched between India to the south, east and west and to the north by the People's Republic of China.

What I mean is that a lot of it is at high altitude, the Himalayas. The landscape of the country ranges from sub-tropical in the south to the high mountains of the Himalayas in the north. It is a kingdom that was very remote and still is but this is changing (to the detriment of the tiger perhaps?). That is why the tiger has survived there better than anywhere else it seems but I am frightened for the tiger because this fine program has told the world where the tigers of Bhutan are and I feel a terrible foreboding that it won't be long before the Chinese traders in tiger body parts start to bribe the farmers of Bhutan to lead them to the tigers or simply poison them.

Tiger body parts are already very expensive. An example is the tiger penis valued at $6,000! This is astonishing, ridiculous but sadly true. As the tiger becomes scarcer, which inevitable happens due to humankind's gradual expansion, its body parts become even more valuable. This in turn drives tiger body part traders even harder and with more commitment as the rewards are higher. This in turn makes the tiger wherever it is very vulnerable; increasingly vulnerable. The tigers of Bhutan are in remote places. This offers protection to this animal. But is it enough considering its value? Here's the madness. The tiger's body parts have no medicinal effect despite their use in Chinese medicine and there are effective alternatives - crazy isn't it?

A farmer was interviewed in the program. He expressed a beautifully enlightened view of the world. He wanted to live in harmony with the tiger. He left the tiger alone. This is the Utopian world that conservationists desire; living in harmony with wildlife, letting them live. He lived in an area where the tiger roamed but accepted its presence and respected it. This in itself provides great protection for the tiger. Of course, I don't realistically expect this to actually be Utopian nor all the people of Bhutan to have identical views but the gut feel that I have is good.

His view was in stark contrast to that of many people in the west, particularly places like Texas, USA, where there are more tigers in captivity (over 4,000) that there are wild tigers in the rest of the world (about 3,000+). There are about 12,000 captive tigers in the world.

There the underlying culture seems to be to "own" the tiger, quite the opposite to the Bhutanese farmer. Perhaps the reason is because in Bhutan people live much nearer nature; they are more in harmony with nature, I sense. Or they are perhaps less commercially minded. I am simply speculating, however. 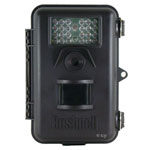 Well, back to the tiger. The research team were unsure about the presence of tigers in Bhutan. How many were there? And where were they? To their astonishment using Bushnell camera traps (see picture) and all other means, they discovered that tigers in Bhutan were living over 4,000 feet in the Himalayas! The landscape was harsh. It is the landscape of the snow leopard, which was also caught in camera traps.

They recorded all manner of large wildlife that was ideal to support the tiger as prey. They also decided that the tiger population density was about 6 per 100 square kilometers.

The underlying purpose of the study was to research the possibility of a corridor of land (see map above) that would join existing reserves that are adjacent to the Himalayas to the north of India in countries such as Bhutan, Nepal, the Indian state of Sikkim, the federated state of Arunachal Pradesh. Such a corridor would provide the kind of space that the tiger needs to thrive. The tiger reserves in India are generally too small for the large home ranges required by the tiger. When a tiger becomes adult it leaves the natal area and seeks a home range. If the reserve is too small it comes in to conflict with other tigers doing the same thing and so will be forced to leave the reservation where it has to live in close proximity to people and cattle. It kills cattle and is then poisoned when farmers poison the carcass. There is also the issue of narrow gene pools in reserves. Inbreeding is likely to result, which can cause sterility with inevitable consequences.

The study group were astonished and thrilled that tigers live above an elevation above sea level of 4,000 feet. Before this discovery tigers had been recorded at elevations of 3,960 feet but I am almost certain that this study has altered our knowledge of the tiger, this being the highest elevation ever recorded as I understand it.

In conclusion, the research team were satisfied that the novel and enlightened concept of a large corridor of land was workable. The core area in this corridor is Bhutan. This area could and should be the powerhouse for the regeneration of Bengal tiger populations. A team representative presented a report to the King of Bhutan who declared that the tiger was not owned by us but should be saved for future generations.

From The Tigers of Bhutan to Tiger