2009: We are informed by the press (The Times Saturday 14th November) that there were no Burmese cats in Burma until they were recently re-introduced. I find this story very odd indeed. I am not sure that it is factually correct. I think it is a bit of a journalistic story. Was Burma ever the land of the Burmese cat? This story makes me doubt it. The cat in Burma was probably a Siamese type cat. And isn’t it a bit odd too that a second high profile purebred cat also hails from Burma, the Birman cat. They are completely different in appearance. Burma is now called Myanmar.

Am I being too provocative and cynical? The story is as follows. There have been no Burmese cats in Burma for the past 80 years. They had simply vanished from their homeland, it is said. It is also said that the Burmese cat once populated the palaces of Burma but now all we see are moggie tabbies that have taken over and which were imported by colonialists. 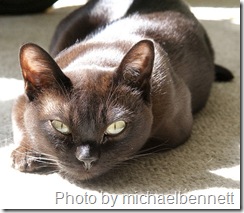 The article says that the last Burmese cat was exported from Myanmar in 1930 by an American sailor. And from this single cat the Burmese purebred cats of America and Britain where created.

Mr Wong How Man, a conservationist, wanted to rectify this sorry state of affairs and has done so by asking four friends to buy one each from Harrods pet department as British breeders were apparently disinterested in helping. The breeders did not want to deal with him. More strange stuff.

To these four he added two from Australia and shipped them to Hong Kong where he lives to breed them and thence to import them into Burma where they are happy procreating to a current population size of 40, at Inle Lake in eastern Myanmar (see map). The status quo has been re-established. Fantastic.

OK, that is the story. But back to my original thought; is it correct to say that there were no longer any Burmese cats in Myanmar and that the last one was shipped out in 1930? Nah, this can’t be true.

It is a given that breeders refine and polish up a cat that has been discovered. This has happened to several breeds. In fact all naturally occurring cat breeds such as the Egyptian Mau to name only one that were turned into purebred cats in the west (predominantly the USA) no longer resemble the original genuine article.

This means that if we look for a Burmese cat in Myanmar that looks like a purebred Burmese as bred in say the USA we will be unsuccessful. I suspect that the original Burmese cats living in Myanmar look very different and that they are still there in their hundreds of thousands. Or it was never there in the first place. Try and find a Singapura (drain cat) in a Singapore drain and you will fail.

If I am correct the cats that were re-introduced are an entirely different breed of cat. It is a bit like re-writing history. Mr Wong has turned what was probably a semi-feral Burmese cat in the time before 1930 into a most glamorous purebred cat, which it cannot have been.

That said feral cats that are confined to one area for a long period and which procreate naturally are as purebred as show cats in the west it is just that there are no certificates to prove it. To conclude; to say there were no Burmese cats in Burma is wrong. I believe they were there and are still there (or were never there). They just don’t look like cats that we in the west think of as Burmese cats.

There is one aspect of this story that I like. Mr Wong has considered trying to use this stunning cat to bring democracy to Myanmar – long overdue. If he gave one (a female) to the general running the country and one (a male) to the lady who has fought for democracy so valiantly, Ms Suu Kyi (and as a result has been cruelly placed under house arrest for 14 years) perhaps the cats would bring them together?