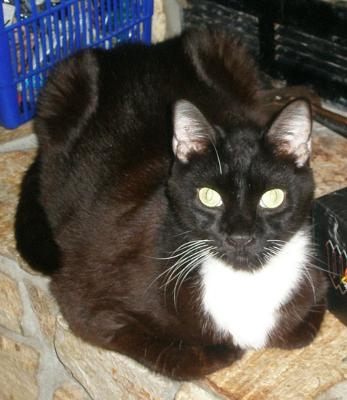 Thomas came to us 3 years ago when his previous owner who had rescued him as a tiny kitten, passed away. She was a very dear friend of mine, & was only 45 at the time of her death. Thomas was almost 11. About a month after her death, he spooked when my oldest son came in & darted out the door between his feet & was gone. We searched for months, but finally gave up. About 2 weeks ago, we went to Animal Control to check on a couple of cats on their listing. One of the young kennel techs wanted to show us one of his favorite cats, a big black & white boy who had been dumped by his owners. He pulled him out of the cage, backed out, turned around, & my stomach flipped over. My daughter looked, looked again, & said OMG it's THOMAS!!!!

Thomas heard her voice, heard his real name, & turned towards her & started squirming. She took him from the kennel tech, he wrapped his big old feet around her neck, & let out this huge, booming purr. I told him to pack him up, he was coming HOME. They couldn't find his paperwork in the file it was supposed to be in, so the Officer told them to check the EU pile for the day, which was in the other room. Thomas' paperwork was IN the pile of cats to be put to sleep that very afternoon!

We hugged him SO tight! I fully believe that my friend across the Rainbow Bridge KNEW that he was slated to die, & she MADE us go down there that day to find him again & bring him home.

Thomas was dumped by his owners because they had declawed him & he wasn't using the box. That was not what was on his sheet, but it was fact, because we noticed that as soon as we got him home. However, he is now using the box again like a good boy. He has been to our vet for a full check up now that he's going on 14, & despite the fact that he has always been a large cat, tipping the scales at 14.8 pounds, he has ALL of his teeth, bright eyes, healthy gums, & not even a smidgen of a heart murmur. He says he's the healthiest cat for his age that he's ever seen, & that we can expect him to see 20! That's wonderful news to us.

From Thomas the Miracle Boy to Moggie Cats 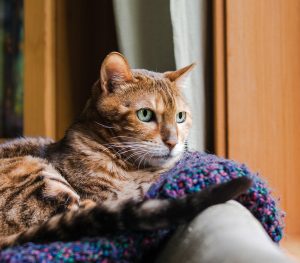