I have just taken in a three legged cat. He is big, heavy and black. He shouldn’t be quite as heavy as it curtails his walking and jumping (down) skills. Although he has no problem in jumping up. In fact his back has been strengthened because he lost his right front leg which means he hops when walking or running and his back has to do a lot more work. In fact he sits up like a prairie dog with ease and holds the position (see photo). All cats can do this, particularly dwarf cats, but his version is more refined and stable.

Why do have I have a cat companion who has three legs? Well it is sad but my mother passed away very recently (funeral was today 30-10-09) and either I took him in or there was the distinct possibility that he would have been put down by a rescue centre. Black cats are less popular and a three legged one, I felt, was in danger. 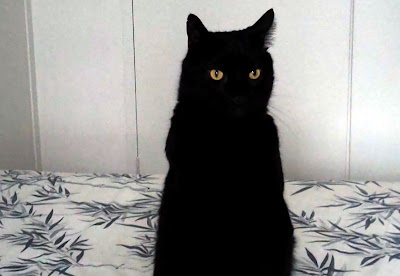 This is a still from a piece of video

Anyway, I smell like my mother (at the cat scent level) so when he smelled me I think he picked up a bit of her and he felt at home. That said I am not really in a position to care for another cat (space problems etc.) but what can I do?

I picked him up two days ago and I am exhausted! He keeps me awake all night or I keep myself awake all night worrying about him. I have made him happy. He has a connection to his human companion who has passed on and for me he is the connection that I can have to my mother. It is a harmonious relationship in that way. 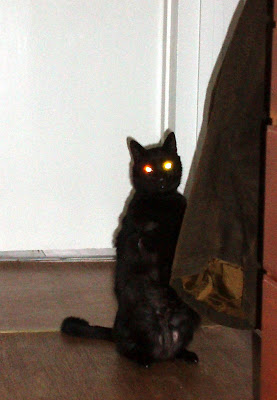 My mother loved cats and I am sure if there is an after life she is happy to see me and Charlie together. Although I am finding him a bit of a handful! He definitely wants to go out. It is the pull of the wild and although he hops around quite slowly indoors, he can really shift when he wants to, which spells potential danger, lots of it. I have a leash and will try that!

A three legged cat can do pretty much everything a four legged one can do. Cats are very adaptable.

I also feel that he may have gone to the toilet outside in an enclosure when he was with my mother, which may translate into a bit of litter training but I am hopeful that he will be OK. I think that some of the drive to go out may be because he wants to go out to go to the toilet.

I’ll probably post some more info about my three legged cat, Charlie. One last thing. Through Charlie the connection to my mother is quite powerful and it is making these moments quite emotional. He is next to me right now.

Update: 14-11-09 I made a short video Charlie. He is a good actor as he can look creepy when he sits there on his bottom in the prairie dog position. So I made a creepy movie. But he is not creepy, just a good actor.

He is settling in nicely but he is a handful. And he is your genuine "messybeast" (I am thinking of Sarah Hartwell's website). He brings in mud by the bucket load from outside and deposits it all over my bed. Here is the video: