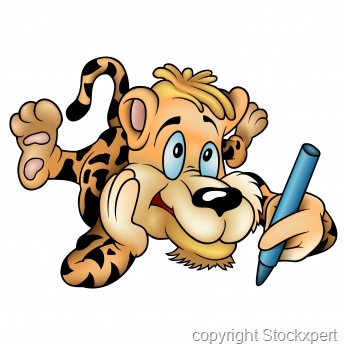 Want to see a tiger cartoon? First, here’s an interesting statistic. According to The Illustrated Encyclopaedia of Cartoon Animals (the encyclopaedia) by Jeff Brown there are:

Now, what does that mean? Well, it seems to fly in the face of the fact that the tiger is probably the world’s most popular animal (new window). For some reason the lion seems to make a better cartoon cat. The tiger can beat a lion in real combat – we think! But the lion beats the tiger in the number of cartoons. Perhaps the two are linked. Cartoon characters are always a bit comical, a bit of a failure really because that is more endearing. And tigers are not naturally predisposed to play that role. Neither is the lion but it is more suitable than the tiger to play the cartoon cat role, I think.

OK, what are the tiger cartoon characters? Here is the list from the encyclopaedia. Where the lettering is highlighted in blue/purple it is a tiger cartoon that I have discussed further below on this page:

Here is some detail about the main tiger cartoon characters – the one that are highlighted:

The videos here are home made versions. Hobbes is a tiger, yes, but he is a stuffed one. And he is naked but he wears a scarf when its cold and he wears clothes when Calvin dresses him up to go out to eat. Calvin, his 6 year old best friend, describes Hobbes as a bit quiet and peculiar but a good companion. Sometimes Calvin says that Hobbes has, “fuzz for brains”. This is a comment on the fact that he does have stuffing for brains. It is a typical relationship between child and stuffed toy and shows the imagination of a child.

The question is whether Hobbes is alive. Well of course he is alive, he talks and is animated! Anyway to Calvin he is very much alive. Bill Watterson, the creator of the cartoon said that Hobbes was, “more real than I suspect any kid would dream up”. The tiger is only a stuffed toy to characters other than Calvin. He comes alive for Calvin.

The Calvin/Hobbes duo is in reference to two well know people from European history:

The encyclopaedia says that they were contemporaries but their lives did not overlap, in fact.

The Calvin and Hobbes tiger cartoon characters were created by Bill Watterson. Hobbes made his debut in November 1985. Watterson seems to have been a bit of a philosopher himself.

In this tiger cartoon series, Calvin is the unpredictable one while Hobbes is very dependable warning Calvin about hair brained schemes when his tail goes bushy out of anxiety for the consequences of the scheme. This is a reflection of what happens in real life when a cat’s tail goes bushy when it is emotionally aroused and in defensive mode. Hobbes also tells Calvin off for being irresponsible watching rubbish television and recommends that he does more sensible things such as read a book or go for a walk! Hobbes then ends up watching the TV.

Hobbes seems to have an endearing mix of characteristics being for example anxious about taking a sled ride but still liking some rough play. We jump back into the real world when Hobbes gets damaged in play and needs to be repaired by Calvin’s mother.

Hobbes is liked by Calvin’s classmate, Suzie Derkins. She hugs him and Hobbes likes that.

Below is a video showing us a real life example of Calvin & Hobbes. The cat, though, is not a tiger but a truly fantastic domestic cat nonetheless and whose name is MAGIC – a very apt name for this magnificent cat living in California, USA (an F1 Savannah cat, incidentally). The video is magic too; as an example of a close relationship between human and cat:

I have written an article about the tiger cartoon character, Tony, some time ago. You can see it here: Tony the Tiger. He is the mascot on Kellogg’s Frosted Flakes.

I have also written a separate article about the tiger cartoon, Cool Cat, which you can see here: Cool Cat Cartoon.

Tyg is another tiger cartoon character. He is the leader of a group of little television animals who help out when someone is in a jam. This is a production by the famous Hanna-Barbera team and it was inspired by Hallmark card characters. The first show was in 1982 on NBC (Saturday mornings). The characters and voices were as follows:

Toys were manufactured based on these characters. The characters are about two feet tall and they wear undersized T shirts. They live with Mr Dinkle a park guide.

When called to action Tyg calls (in a play on words), “It’s shirt tale time!…” The shirts enlarge and reveal what each in the group is thinking. After a close call during an adventure the shirts together spell out, “That was a close one”.

They are pretty high tech. They have television wrist communicators and a jet car. The car can be transformed into a rocket and it is hidden at the base of a statue in the park.

Mr Tawny is a talking tiger and a character in the Captain Marvel cartoon series. He is befriended by the superhero Captain Marvel.

His story is pure fantasy of course but it has some nice underlying philosophy. Mr Tawny goes from being a regular tiger cub in India to a tiger who:

This is all due to a magic “serum” that was invented by a hermit-scientist and which Mr Tawny drank. Mr. Tawny’s mother is shot by a hunter. In 1948 when Mr Tawny first appeared there were still people who hunted tigers for pleasure. Now they are killed for body parts for Chinese “medicine”. See Wild Cat Species. Mr Tawny becomes the pet of a son’s missionary (Thomas) but is then blamed for the death of a man killed by a tiger. Thomas and Tawny run into the jungle to find safety and meet the hermit-scientist…..

Being able to speak Mr Tawny is then able to prove that he was not the tiger who killed a person. In fact he kills the tiger that had killed the man. Well, I am not sure that that was wise! When a tiger kills a person it is for very good reasons and nearly always because of something that humans have done. Anyway back to the cartoon.

I suppose that now being part human Mr Tawny wants to live in a human environment and he sneaks aboard a ship and travels to civilisation (well sort of – not sure where it is though). Once ashore he bumps into Captain Marvel who promptly puts him into a zoo! Mr Tawny escapes and walks into a restaurant ordering raw meat (of course). All the waiters scram!

When Mr Tawny bumps into Captain Marvel again he has a chance to tell him his story and the captain helps him find a job lecturing on nature (who better?).

Mr Tawny got his first name from a competition. Bill Batson (who is the secret Captain Marvel) sponsors a competition to find him a first name and the winner is Tawky; a very apt name. Mr. Tawky Tawny continues to work at the museum lecturing and does some part-time work modelling clothes.

That’s All Folks on tiger cartoon……no not quite. Here is a cartoon that features tigers but it is very different:

From Tiger Cartoon to Cartoon Cats