The tiger is the world’s largest species of cat and the only striped wild cat. Please check out the wildcats by size. Although weights of wildcats tend to be unreliable. The heaviest Begal tiger on record weighed 258.7 kgs (569 pounds). Although the Bengal tiger is not generally as big as the Siberian tiger.

The Siberian tiger varies considerably in size (Siberian tiger picture). Tigers in Sumatra and the Indonesian islands are smaller and darker. The fur of the tigers living in the more northerly regions is longer and denser than that of the tigers further south. Adult male tigers in tropical areas are about one half meter shorter in length than equivalent males in northern areas. Adult females in tropical areas are similar in size to a large leopard.

Tigers are physically very powerful and able to catch and kill large prey. The bite strength is increased by the short skull. The canine teeth are impressive. The forelimbs are massive to grab and hold prey. The tiger is taller at the shoulders than at the hind quarters. Bengal and Siberian tigers are about a meter (39.37 inches) tall at the shoulder. By comparison the world’s tallest domestic cat MAGIC is 17.1 inches at the shoulder. 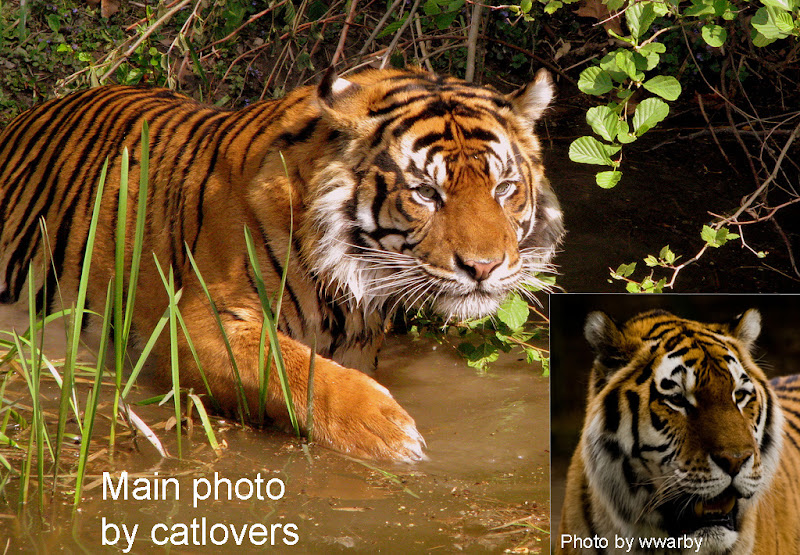 The background color of the tiger, as can be seen in this superb photograph, is red/orange. The undersides of the chin, the throat, the chest and undersides of the body are white. There is also white fur around and above the eyes and on the cheeks and ruff, which provides a high contrast background
for the dark markings. There is a clean white spot on the back of the ears; ear spots are typical of most wild cats and wild cat hybrids.

We all know the dark vertical stripes, which vary in length and width. The whole appearance is high contrast and conspicuous. However the coat is excellent camouflage in forest at twilight and sunlight. The tiger’s pattern is like a fingerprint – each one is unique to the individual cat allowing conservationists to identify individuals.

Melanism is known to occur in tigers albeit extremely rarely, it seems. Three records exist of melanistic tigers in an area that includes Myanmar, Bangladesh and northeastern India. Melanism renders the tiger black with faint, ghost markings.

At the opposite end of the spectrum there are white tigers that we see in zoos. There are probably none in the wild. They are bred (inbred) in captivity. The original captive white tiger was called Mohan a male cub captured in the forests of Rewa in Madhya Pradesh. The inbreeding of white tigers is irresponsible activity for the sake of commercial gain. It causes severe health issues such as eys weakness, swayback and twisted necks.

More on topics other than tiger description: Tiger Facts