Want to see a tiger Woods wife photo? People do after all Tiger and his family has been through and will be going through.

Not so long ago people were looking for “Tiger Woods Swedish girlfriend“. Then they married. A glamorous couple. They have two children.

Now it seems to be all over after Tiger’s alleged adultery. I have read today that the divorce is being finalised.

It seems that it is an uncontested divorce. A quiet divorce. She is divorcing him and it must be on the grounds of his adultery although I have not read this.

As to division of assets. I would expect that she is looking to receive a hefty monthly maintenance payment and a lump sum that might equate to about half of what he earned during the time that they were together. It may fall short of that however as he earned a huge amount during that time and she doesn’t need half of that.

The above photo was taken some time ago, perhaps when they were first married or thereabouts.

And below is another by an amateur photographer at the AT&T National Golf Tournament (2009). Things have changed for Tiger’s golf since then. He played rubbish in this tournament in 2010, which was won by an English golfer, Justin Rose, who I have met when he was 17 and playing amateur golf (bloody well..:) 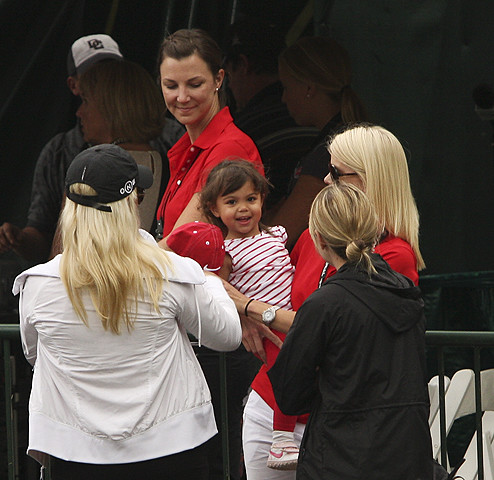 They made a nice couple. She is very attractive. As at 7th July 2010, Tiger has just played in a pro-am in Ireland and rather than stay in or near Great Britain in preparation for the Open golf championship at St. Andrews he has flown back to Florida to see his kids. He must be getting visiting rights. He sounds p**sed off and his golf is relatively very poor. Too much on his mind, I am afraid.

I presume that he is flying back to the notorious Tiger Woods house where the accident happened in Orlando. I don’t know if the new large family house on Jupiter Island, to the south east of Orlando in Florida, is completed. It is being built on a large plot on the Atlantic coast. Jupiter Island is a thin strip of land populated by the rich off the east coast of Florida.

After divorce I would expect the children to live with Erin, the mother, with extensive visiting rights to Tiger. But that will be a sad loss to the children. This rather than the money is the biggest loss to Tiger and for the entire family and mainly the children.