Tiger Woods yacht is something people are interested in. I have covered Tiger Woods house and Tiger Woods Swedish Girlfriend. What next? And why on a cat website!! Well, it’s simple. There is the word tiger in the name and I am doing a series of posts on names with the name of cats in them. And I have got to start at the top. Plus this is a well sought after subject - so here goes.

As the heading picture shows (published under a Attribution 2.0 Generic, Creative Commons license – photo by thelastminute

) the yacht it called “Privacy” because above all else Tiger likes his privacy and recently (December 2009) this is the last thing he has retained because of the auto crash outside his home in the Isleworth Community and his alleged extra-marital affairs causing great distress to his wife and former Swedish girlfriend Elin.

The photographer is Duncan Rawlinson. He has a blog. He says this about Tiger Woods yacht:

The 6,500-square-foot yacht has a master suite and six staterooms. It is decorated in dark cherry wood and beige marble, with leather-upholstered furniture, white carpeting and walls covered in white silk. It has a theater projection system, a gym and an eight-person Jacuzzi. It can sleep 21.

Thanks Duncan. Where did this information come from? Please drop by.

Apparently it was built at Christensen Shipyards. It is a 155 Trideck Motor Yacht. The 155 says it is 155 feet in length. It was called Hull 026 while being built. Tiger left his wife to supervise the construction, never visiting the ship yard, we are told. The yacht was built under the ship yard’s Advanced Production Series scheme.

Here is an interior shot: 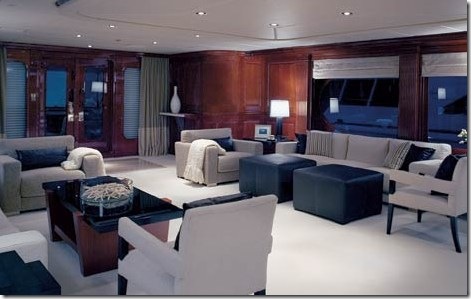 This may be a standard interior for the 155 Trideck Motor Yacht provided by Christensen Shipyards, I don’t know but it shows a very luxurious lounge.

It cost about $20 million and delivery is about one year. By comparison, Greg Norman’s “Aussie Rules” yacht cost $70 million (at cost price). Greg’s yacht is more luxuriously appointed and larger but not substantially larger.

Here is another picture by Duncan Rawlinson of Tiger Woods yacht: 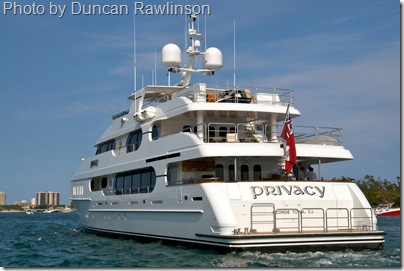 Tiger likes to spend time on his yacht probably because it is private. He can really get away from the paparazzi and journalists. He likes to scuba dive from the yacht apparently and has become proficient. Tiger Woods and his wife spent their 2004 wedding night on the 155 foot yacht.