This article is good, no doubt about it, but I would like to say that taking into consideration the average weights of lion and the tiger would be better if we have to compare both of them. 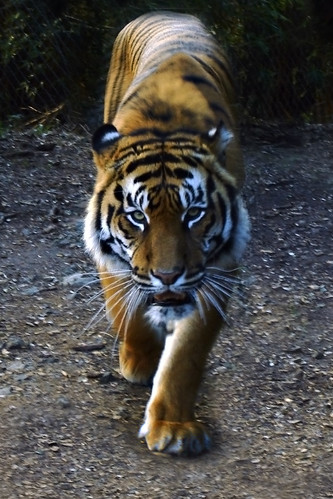 Also in this article the average sizes of both the animals haven’t been taken into consideration which are about (including tail) for African lion:8.5-9 ft; Bengal tiger:9.5-10 ft and the Siberian tiger:10-10.5 ft on an average.

Animals weighing and measuring above this mark have been found, but they are usually rare for example tigers weighing above 300 kg are exceptionally rare, the probable reason being global warming.

Lions generally stand taller than Bengal tigers on shoulder on average by about 1-2 inches but Siberians are almost equal in this case or may even outgrow lions. African lions stand about 42-43 inches tall at the shoulder. Bengals are generally 40-42 inches and Siberians reach about 43-44 inches on average.

You must also consider factors like agility and smartness and the fighting techniques of both the animals. Lions generally charge blindly but tigers have a planned strategy also tigers can dodge attacks. Tigers are very agile and also swifter than lions. Tigers have a more muscular build and even pound-for-pound tigers have more stamina and speed.

It is true that lions have more fighting experience but tigers have experience to fight bigger animals like brown bears in Siberia and sometimes rarely rhinos (Indian one horned rhino).

Tigers also take down a larger prey independently. Only a few cases are known when male lions are known to bring down a large cape-buffalo, but tigers hunt gaur almost regularly which are the largest species of wild cattle bigger than any cape-buffalo.

Lions enjoy a psychological advantage over many animals; that is the mane of the lion makes it look much bigger than it really is, but in case of the tiger this doesn’t help much as tigers are known to fight bigger animals.

The mane also offers protection to the lion and that is the reason why lions are killed less in territorial disputes than tigers. But as I have said tigers fight sloth bears and brown bears and are also known to have killed them and feed on them which have longer hair and more fatty skin than lions.

Tigers have bigger skull cavity for brains than lions and also they have been found to be more intelligent. This is also a determining factor. A tiger lives alone so it becomes difficult for him to hunt when injured, therefore it will generally avoid fight with a lion. But tiger if aroused will surely fight till death; but it will not retreat.

Thus I would conclude that tigers can win in 80% fights with lions.

Hi PARTH TIWARI… thank you for an excellent article on this subject. It fills some of the gaps I left. It is welcome and appreciated.