I recall a visit to a vet many years ago. One of my ferals had recently delivered a healthy litter of 4 kittens and I wanted her examined for any health problems and have her spayed before returning her to the outdoors. I casually asked the vet whether the litter had one daddy or several as I had been researching the subject and was getting conflicting information. Apparently tomcats and genetics weren't part of his education. The vet assured me the kittens had 1 father.

WRONG! Was this what was taught during the 1980's or did the vet form his own opinion on the subject? This same vet wasn't very happy when I asked him why each kitten looked like a different tomcat in my neighborhood! I had one orange tabby, one gray, and two gray and white tabbys.

There is a fertilization window for a female. It generally takes around 24 hours after mating for the female to release her eggs and any sperm can fertilize her. If several males cats mate with the female during this time frame, each can impregnate her(1). That explained my litter of 4 different kittens. The scientific term for this is superfecundation. This is more common in areas where the cat population is dense(2). 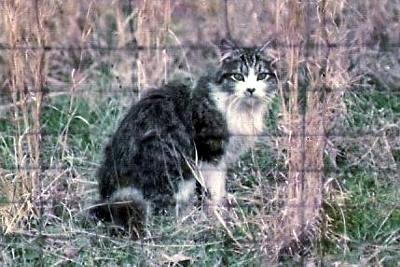 I've learned a lot since my early years as a cat lover. I still roam the internet for information I'm curious about. That is how I get the ideas for my articles to pictures-of-cats.org. I tend to study unususal subjects and want to learn all I can about those subjects. My mother used to use the old cliche "curosity killed the cat." My answer to this is PERHAPS I'M PART CAT. I would consider that a great compliment.

I've met very few cats who didn't like me and it tweaked the curious cat genes I've been accused of having. Is there a reason the cats like me? I know cats can sense whether or not they are in the presence of a cat lover. I decided to do some digging on whether this attraction between people and cats is inborn or learned.

My personal conclusion shows both.

In my research on tomcats and genetics I also gained a little information on the importance of the male. I had considered writing two articles on this. One part would deal with the "how many daddies" debate I've already explained. The other with tomcats and genetics in general. Somehow it refuses to separate in my head since both involve genetics, personality and psychology.

Most cat owners probably agree with me without question that friendly male cats sire friendly kittens. Personally-I LOVE tomcats. The one's I've owned have been sweet and loving lap cats. I've only had one experience with a male cat who wasn't friendly. He wasn't mean. He just didn't want anything to do with people. He got along well with my other cats and with my family. He was a feral I'd taken in at approximately six months old who never grew to love human contact. I made sure he always had food and water and a dry place to sleep. I often wondered whether genetics or environment shaped his personality.

For years cat breeders have known tomcats and genetics both play a role in shaping a kitten's personality . Now studies have been done to confirm this. Dr. Sandra McKune is an expert in animal behavior at Waltham Centre for Pet Nutrition in Britain. This test was done in 1995 and Dr. McKune confirmed that the friendliest kittens were sired by the friendliest fathers.

They also studied kittens sired by unfriendly cats and found they were as unfriendly as their dads. These kittens never had actual contact with their fathers so it was determined that genetics played a major role in temperament during their first weeks of life.

Although genetics plays a large part in the personality of the kitten, the mother cat also has an influence on how her kittens see and understand life. It is possible to take an unfriendly kitten and change it's personality for the better by using a little common sense. Begin by showing compassion to the mother cat so she isn't stressed. Handle the kittens from an early age and show them love. Studies show that kittens with unfriendly fathers who were handled and loved on a regular basis turned out as friendly as those sired by friendly tomcats. A good environment can counteract bad genes.

It is recommended that a kitten being placed in a permanent home should be at least 9 weeks of age. At this age the mother cat has influenced the kitten and taught it basic life skills. This is the ideal age to introduce the kitten to its forever family with a minimum of stress(3). If adopted out younger than this the kitten will not have the hunting skills taught by the mother between 6-9 weeks of age.

Personally I have no problem taking in younger kittens. Most of my cats are rescues where I didn't have any other choice because the kitten was living in a dangerous environment. These were circumstances where the kitten had only a small chance of living long enough to be taught by the mother cat.

I sincerely hope this article clears up a little of the mystic world of cats as they are truly fascinating creatures. It's nice knowing we can help shape their personality regardless of the circumstances they were born into.

Tomcats and Genetics to PoC Forum