Tony the tiger was (and still is, I believe) a very well-known and often seen mascot for Frosted Flakes Cereal. Firstly, a bit about the cereal.

As we might know, it is a product created by the Kellogg Company called ‘Kelloggs Frosties’. It is a standard breakfast cereal made of corn flakes and was first introduced in 1952 (or 1955 – see below).  The difference at the time was that the flakes were coated (frosted – made to look like frost) with sugar. The name Frosted Flakes was used in the USA and Canada. In other countries the name was:

There would seem to be some doubts as to the date of Tony the Tiger’s debut. The Illustrated Encyclopedia of Cartoon Cats says that the Kellogg’s tiger made his debut in 1955. While this website http://fafnir.phyast.pitt.edu/tony/history.html states that Tony began his career in 1952. Perhaps he did begin his career in 1952 but was first seen in 1955 as the full-time mascot of Frosted Flakes. Initially Tony shared package labels with Katy the Kangaroo but Tony was more popular and Katy was phased out after the first year (this implies Tony went full-time in 1953). Also, in 1953 Tony was featured in the August issue of Life Magazine.

Tony’s most memorable catch phrase (tag line) is, “They’re grrreat!”. Some other tag lines have been:

Before he quietened down to family life in the 1970s, during the 1960s, Tony was involved in some wild commercials in which, for example, he:

The video below features the old version of Tony the Tiger and of course the rich, deep voice of Thurel Ravenscroft. Here is a picture of Thurel: 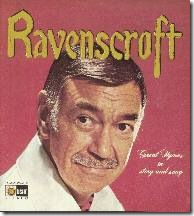 Tony the Tiger is controversial in one way because he promotes a product which is linked to obesity in kids. A study that was published in the journal Obesity Reviews concluded that familiar media characters such as Tony the Tiger in branding products appeared to be a “powerful influence on children’s preferences, choices and intake of less healthy foods.”

As a consequence, Tony was banned from packaging and advertising in: Chile, Argentina and Mexico according to the Wikipedia authors. Popular cartoon characters such as Tony often promoted products that were high in sugar, saturated fat, salt and fat. Healthy food was less likely to feature child-friendly cartoons.

12 years after Tony the Tiger was aired as this product’s mascot, Exxon Mobil opened a new business sector and product line using the existing Exxon Tiger to promote it. They opened convenience stores called “Tiger Marts”. They sold food and beverages. Exxon was cleared of copyright infringement. Although Kellogg quickly filed a claim against them.

The original Tony the Tiger was like an ordinary tiger but he was gradually tweaked into a more muscular, human-like form.

Photos of Thurel Ravenscroft and Frosted Flakes box – these pictures are published under fair use copyright law. I adopt the arguments in respect of both images of the Wikipedia author on this page. 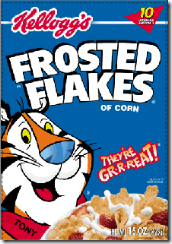