Topaz was found in East St.Louis along the railroad tracks down by the Stockyards in 1972. He had been shot with a .22 rifle. We took him to the vet and the bullet couldn’t be removed. I told my father that we had to keep him because being deformed; no one else would want him. He had six toes on each foot and each one was double clawed. He was a beautiful topaz yellow striped tom.

The minute he was better, he wanted to go out doors. I was afraid he would leave. He stayed for nine years. We would let him in when the weather got bad and then he would want out when it was better. I don’t know how old he was when we got him. He was full grown.

My father raised game birds; pheasants, quail, chuckers, ducks, geese…we would release about 75 quail a year. It was a lot of work. Topaz could stay if he didn’t go after the birds. One cold winter day my father looked into our family room and I was curled up with Topaz and my pet Pheasant Annie. At that point, he quit worrying about the cat eating his birds!

We later found out that Topaz was a Hemingway cat from way down in Key West in Florida. How he got up here we will never know. I will always remember him as one of the best cats that I have known. 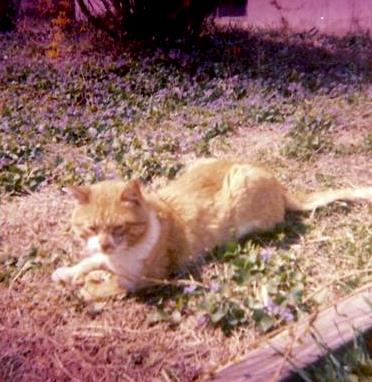 This is the only picture I have of Topaz. The original is small and yellowing. I tried to enlarge it. I hope it works. Those are violets in the back ground. My sister and I transplanted them from the woods near our home as a mother’s day present.

Topaz was a very large cat. He would sit on the outside ledge of our dining room window and leap on my shoulder. He would stay there as long as I would let him. One day a friend of my fathers came over to cut wood.He didn’t notice Topaz and almost took a heart attack when Topaz jumped on his back.

He had kittens with the neighbors cat. They all had the polydactyl trait.Topaz son “butch” lived to be seventeen. He grew up with their son and they mourned his passing as he was a family member.

Hi Julie… Nice story. Thanks. If you have a picture of Topaz please email me (update: Julie sent me the above pic after seeing this note):

“Hemingway cats” is actually a term that can mean polydactyl cats (cats with more than the usual number of toes). This is because the author Ernest Hemingway kept polydactyl cats. Please see American Polydactyl Cat