This article is based on a paid for research paper dated 1972 of similar title and authored by J.K.Frenkel and J.P. Dubey. It was published by The Journal of Infectious Diseases Vol. 126 No. 6 pp 664-673 (the document). These are not my views, please note. I believe that the risk of infection is overstated. The organism Toxoplasma gondii was first described in 1908 in Tunis {1}.

The researchers found that 45% of stray cats and 47% of domestic cats in Iowa and Kansas, USA, had antibodies to toxoplasmosis indicating its presence. However “asymptomatic infection is common”. This means there are no symptoms. Young kittens that are nursing and just weaned die of the infection, while once they are adult enough to hunt “disease and death are rare”.

If a cat’s diet can be controlled, “cats can be kept as relatively safe pets in regard to toxoplasmosis”. Even when the diet cannot be controlled; although cats are at risk, the risk is a small one. The benefits of keeping of a cat it is argued far outweighs the very small risk.

It is worth stating that cats that have built up immunity through the presence of antibodies are safer pets as after reinfection they shed oocysts (see below) only briefly and in reduced numbers. 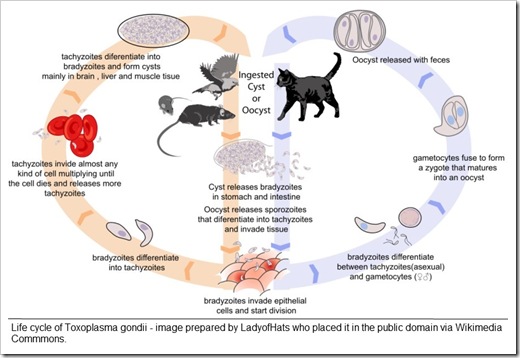 Above: life cycle of toxoplasma gondii. Below: transmission of this infection.

Click on these images to see large format versions. 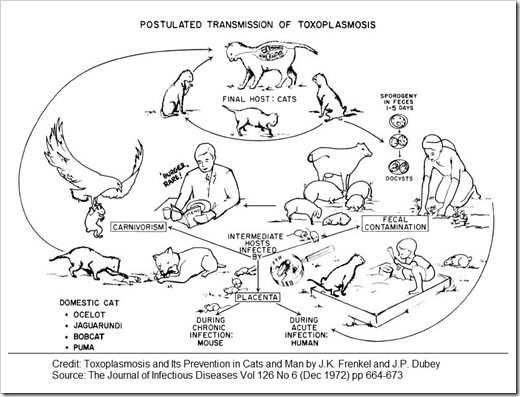 Toxoplasmosis is mainly acquired by people through the handling and eating of raw meat and through contact with the feces of cats infected with Toxoplasma gondii, which is a species of parasitic protozoa in the genus Toxoplasma. The definitive host of T. gondii is the cat, but the parasite can be carried by many warm-blooded animals (birds or mammals) {2}.

The primarily source of contact by people with cat’s feces is in cleaning out litter boxes. Cats shed toxoplasma oocysts after eating mice, rats, birds or meat containing toxoplasma cysts, as well as after the ingestion of oocysts. Oocysts are a hardy, thick-walled spore able to survive for lengthy periods outside a host {3}. Oocysts are “the key to the epidemiology of toxoplasmosis since they infect all mammals and birds tested and circumstantially humans” {4}.

Oocysts are shed by cats for 1-2 weeks during primary infection. They are non-infectious until “sporulation”, which requires 1-5 days or longer. Sporulation means: The production or release of spores {6}. Oocysts can remain infectious for several months to more than a year.

Transmission of toxoplasmosis gondii through carnivorism appears to be frequent. Oocysts “began to appear in feces on the 4th day after cats ate infected mice”. Between 1k and 1m were shed on the 5th day. Infected cats that have just been weaned may shed millions of toxoplasma cysts. Kittens tend to become infected after starting to hunt. When symptoms are caused by the presence of toxoplasmosis the symptoms are not specific enough to directly diagnose the infection. Symptoms are: diarrhea, weight loss, fever, pneumonia and encephalitis.

Ideally feces and litter pans should be disinfected and feces disposed of daily safely. Disinfection can be the application of boiling water. Feces can be flushed down the toilet.

Avoiding infection to indoor cats can be achieved by providing dried, cooked or canned food and ensuring that the cat has no access to hunting mice etc. Freezing meat is not a sure way of killing toxoplasma cysts. The use of a regularly disinfected and cleaned litter box is better for prevention than allowing a cat to use soil outside as cats can pick up oocysts in the soil and ingest them. “Control of the food provides the only practical means to avoid infection” {7}.

Stray cats obviously have a greater chance of being infected. They can leave feces in areas outside that can persist for months. Dry conditions as found in south west USA can decrease the survival time of toxoplasma oocysts in the soil. To decrease the chance of picking up an infection from soil while handling it, gloves can be worn and hands washed before contact with the mouth and “mucous membranes”.

If there are children’s sandboxes in the garden they should be covered when not in use. Contaminated sand should be replaced.

Toxoplasma is found in port, mutton, beaf and chicken. Toxoplasma is killed by heating the meat throughout to 66°C (150°F). Freezing as mentioned “markedly decreases the number of viable cysts in the meat…” {8}

In people infections are mostly asymptomatic. Disease occurs most often in babies. This is where the arguments about the need for pregnant women or women of child bearing are to take preventative action stems from.

Pregnant women should eat only adequately cooked meat. They should leave the cleaning of litter boxes to others the authors say or use gloves. Airborne infection is not a factor.

As at the date of the research paper from 1 in 10,000 to 1 in 1,000 babies were infected. If a pregnant women develops a fever, rash or lymphadenopathy she should be serologically tested for toxoplasmosis. “Lymphadenopathy” is a term meaning “disease of the lymph nodes”. Serology is the scientific study of blood serum {9}. Diagnosis of infection of a pregnant mother is usually too late for an abortion. Chemotherapy during pregnancy is suggested by the authors.

Testing for levels of IgM on newborn infants “may be more beneficial”. IgM means a basic antibody that is produced by B cells. It is the primary antibody against A and B antigens on red blood cells. Infants with high IgM can then be tested for IgM antibody to Toxoplasmosis. An antibody is a protein that is used by the persons immune system to identify and neutralize foreign objects, such as bacteria and viruses.

1. infections in rats and mice can lead to them losing their fear of cats and indeed being drawn to cats.

2. infected male humans have a sixfold increased risk of a traffic accident due in part to slower reaction times.

3. prevalence is affected by climate and climate change may affect its overall prevalence.

4. countries where raw meat is more commonly consumed have higher rates of the infection, unsurprisingly.

Toxoplasmosis and Its Prevention in Cats and People — Notes – sources: