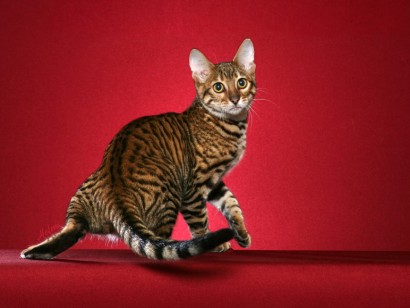 This truly is one of the best photographs on the Internet of a cat. The cat is called “Jaylin Art”, photographed at “the Great Lakes Regional Cat Show in Grand Rapids, Michigan, 2007” …Helmi Flick. Want to see it bigger? Click here or the picture. Please respect Helmi Flick’s copyright.

The Toyger is a designer cat; fabulous looking and modern in concept. Particularly as seen through the lens of Helmi Flick. As could be expected, I don’t live with a one of these superb cats. They are rare and special.

What immediately comes to mind in this. There has been a very particular and precise development program for this cat breed with clear goals. In my opinion, this is because the founder of the breed had a very clear and precise idea as to (a) the look of the breed and (b) the kind of person interested in adopting this cat, before embarking on the project of development.

She also had the stated intention of inspiring people to think more about the conservation of tigers in the wild. They allow you to have the “look of the wild” in your home. In short, the intention is to breed a domestic cat that looks like a tiger.

The person who had the idea of developing this cat breed is Judy Sugden of EEYAA Cattery (USA). I think that a description of the origin of the cat should begin with a short discussion about the kind of market the cat is designed for. As stated, I think that it was uppermost in the mind when this breed was developed.

It seems that it was decided that there was (and still is) a strong interest in exotic wild cats (and indeed wild animals generally). Some people like to be near and/or involved in such animals. This is difficult because they are dangerous and in any case mankind’s activities are endangering them. There is also a desire by some to possess great looking things, whatever it is. This is human nature.

Bring these two factors together and you have a clear market for a wild tiger that is fully domesticated and is small enough to take home and fit in with modern living. And that includes apartment living. This cat would also be a constant reminder of the plight of the wild tiger. We have then the Toyger or a toy sized tiger. The market clearly in mind; how to meet it?

The breed was originally developed by refining and clarifying the mackerel tabby pattern on Domestic Shorthair cats in 1980. “Tabby” refers to the coat type found on mixed breed cats and on some pure bred cats (if the breed standard allows). A tabby coat has distinctive markings, in this case, stripes. These stripes resembled the look of a certain type of silk made in Baghdad many centuries ago.

The tabby stripe had the potential of being developed through careful breeding to appear like tiger markings (clarified, more distinct and greater contrast). By importing and introducing a male cat from Kashmir, India in 1993, which had suitable head markings and breeding from him, the appearance of the tiger head was developed. Note: Jean Mills the founder of the Bengal did almost the same thing so perhaps the idea came from her.

Thereafter and currently (as I understand it) the breed is being crossed with Bengal cats (hence this is a hybrid cat) to reflect the big wild cats’ coat (and conformation). Early in the development program a bemgal called, Millwood Rumpled Spotskin, was bred with domestic cats and is considered the cornerstone of the breed.

The appearance of this cat is very important to the breeders as the objective of the breeding program is about appearance. Of course temperament is also always foremost in the minds of good breeders. It would seem that emphasis is put on markings and head conformation. This cat is medium sized and short haired.

These words describe the appearance: Glitter – dramatic – patterned – high-tech – glamor – nature-loving – dreams. These words give a clear “feel” for the underlying “modus operandi” of the breeding program.

In order to achieve their objectives breeders of this cat work with the assistance of computer imaging software to allow breeders to have a target to aim for over the next 3 years (from 2007). The coat should have orange/tan background with dark stripes (modified mackerel pattern ). The head is important. There should be “headlights” meaning light areas (white fur) above the eyes. The program is well advanced but they say there is a long way to go. The strong markings and coat color are in place……..Read more by clicking on the 2 links above or on the thumbnail photographs.

I am digressing a bit but if you’d like to see a Bengal cat with Toyger eyes (headlights), click on this link: Bengal cat Toyger eyes. The breeder of the Bengal cat is Russian and the appearance remarkable. I would have thought Judy Sugden might get in touch with the breeder.