Not only are toys for cats and dogs in the UK and the USA largely unregulated by government, it is a minefield to find out information about the extent of any regulations and the sort of protection that companion animal guardians have when purchasing toys for the cats and dogs. The Internet is quite unhelpful. You would have thought that there would be far more well presented information. But this is not the case.

At the outset, I will add that consumers are protected in one respect when they purchase toys for their cats and dogs. The retailers are potentially liable when selling defective toys which harm an animal. Purchasers can get a refund from the retailer but that’s about it. When a veterinarian’s bill might add up to thousands of pounds or dollars then the sort of recompense you can get from a retailer pales into insignificance.

Toys for children are highly regulated and there is a lot of protection. What is required is proper government regulation and safety standards with respect to toys for companion animals which are often imported from China. It is ironic that perhaps most manufacturered animal toys come from a country where there are no animal welfare laws and extensive animal abuse.

This leads me nicely to a recent story on the NBC Miami website, which highlights the weakness in this part of the consumer marketplace. A lady living in South Florida, USA, Christina Phillipis, discovered that her cat Mochie had been injured in the eye when playing in a tunnel. This sort of toy is popular with cats because they instinctively like to explore and are inquisitive. A piece of the metal frame had ripped through the fabric of the product and poked Mochie in the eye causing significant injury. The veterinary treatment was going to cost $4,000 to save the eye. And if treatment was not carried out within about a month then the veterinarian said that he would have to take out the eye.

Christina learned that the pet toy industry is largely unregulated. The Consumer Product Safety Commission can put pressure on businesses to recall children’s toys which are unsafe but there is no government oversight with respect to toys for companion animals. As it happens, the retailer who sold the toy, Petco, covered the veterinary bill which I think was good of them although they had received no other complaints regarding this product.

Although Petco acted honourably they had to act after the event – a reactive step. Paying compensation is useful but it is far less good than taking proactive steps to prevent the injury in the first place which can be achieved through proper government regulations which are enforced.

The problem is that although the consumers and companion animal guardians would like better protection for their animals the manufacturers who lobby governments don’t want the interference and burden of regulations because it will hurt profits. Also they are less likely to see companion animals as having the sort of rights which lead to equality in respect of toy manufacturing standards.

There are numerous ways that companion animal toys can be harmful such as containing toxic heavy metals found in imports from China. I’m referring to substances such as cadmium, lead and chromium. Sometimes foreign objects can be contained within toys such as a sewing needle being found inside a dog’s stuffed reindeer toy by an Ohio companion animal guardian. It’s about standards of manufacturing.

There are American pet toy manufacturers who minimise outsourcing and are therefore able to better control standards. One such manufacturer in the US is a Colorado-based company called the KONG Company. They manufacture rubber toys for dogs and their products are made with FDA-approved materials and tested for safety. Their imported product lines from China are tested in China and again in the US to prove that they are safe and non-toxic, said their director of marketing. They are obviously more aware of the potential hazards and have taken steps in house but this is voluntary. There is no obligation for them to do this other than avoid customer complaints and to sell more items.

We don’t have statistics for the number of companion animals hurt by toys. However, we do know that the business of making companion animal toys is huge and highly profitable. My impression is that not enough people are aware of the potential hazards. This feeling comes, in part, from the fact that a petition which is now closed to require pet toy safety regulations only gathered 1,335 supporters. This article is intented to try and highlight the problem.

It is said that the best pet toys are homemade. That automatically eliminates any hazards in manufacture provided the person making the toy applies common sense. 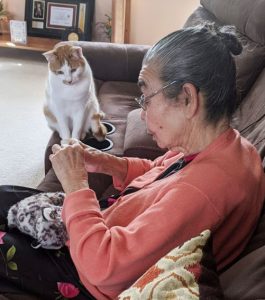 This is a different sort of cat picture. One made for the modern age. An age when the throwaway culture ...
Read More 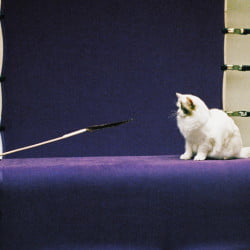 How do you stop a kitten from biting and scratching me?

The question is not mine. The problem does not concern me, I hasten to add, but there are lot of ...
Read More 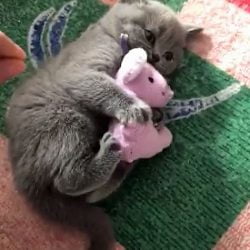 The reason why domestic cats stop playing with toys quickly

I feel that commercially manufactured cat toys tend to prove to be a failure too often. Cats are just not ...
Read More

Have you ever brushed a small mountain of fur off of your furry feline and thought 'there must be a ...
Read More

Although quality cat caretaking can be expensive, there are ways to save money if you have the time and inclination ...
Read More 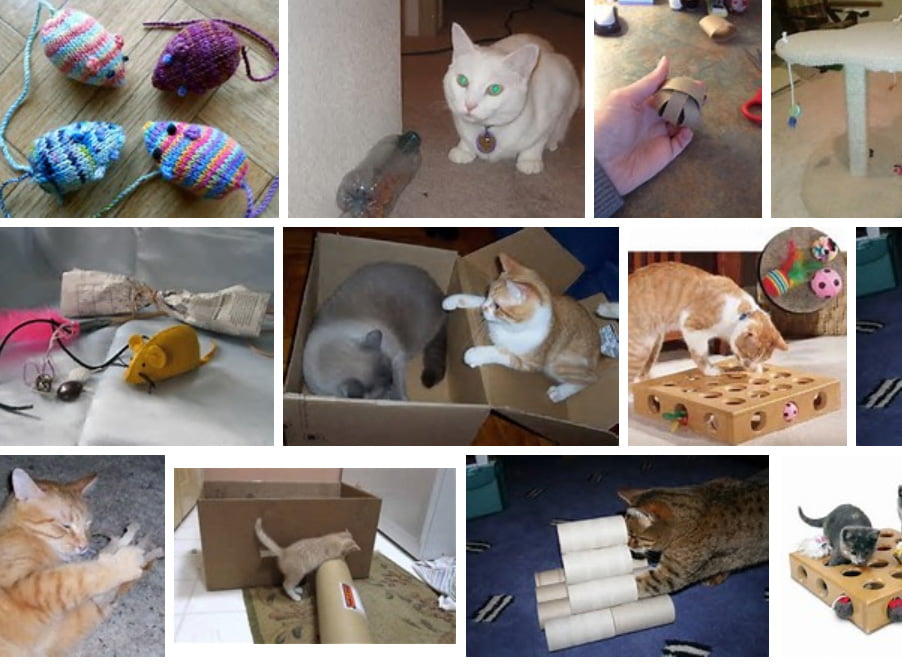 Homemade cat toys are free and as effective as purchased cat toys therefore they are better 😉 - Cats like ...
Read More 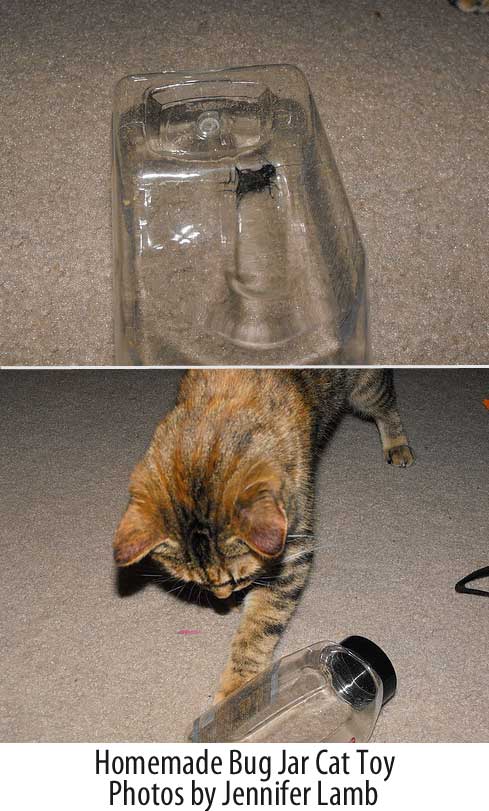 The "bug jar cat toy" above is entirely home made, of course. I wonder if it is as good as ...
Read More
Please comment here using either Facebook or WordPress (when available).