When a cat consistently refuses food; the old adage, “A cat’s gotta eat” is the rule we must follow. According to one of the leading experts in feline nutrition and health care, Dr. Lisa Pierson,

“Cats should not go more than 24 hours without eating”. 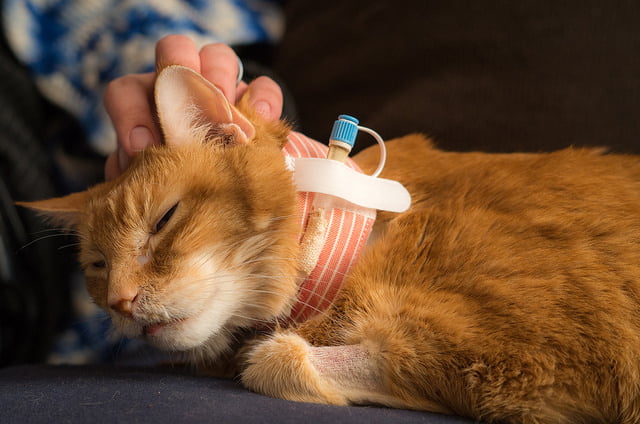 “If your cat has stopped eating, it may develop hepatic lipidosis. Some cases have no known cause; however, most are associated with anorexia.

When the cat is fasting (not eating) the cat’s body releases large amounts of fat that travels to the liver where it settles and clogs it so much that the liver no longer functions normally. The cat, which may have been eating minimally at this point, will want to eat even less or not at all.”

Thus begins an extremely vicious cycle which is often difficult to break in order to get a cat to want to eat. However, it goes without saying that a cat who refuses food for more than 24 hours should receive prompt veterinary attention. Since cats receive a substantial amount of fluid from their food if they are eating a moist or raw food diet, kitties quickly can become dehydrated.

So what can a kitty guardian do to help rectify this frustrating situation? Some cat guardians begin the process by syringe-feeding. While this may help “jump start” a sick cat’s appetite, syringe feeding also can turn into a two-way struggle. There are many videos on YouTube showing how easy it is to syringe feed and hydrate a cat, but even though I followed the directions to a “T”, we found it to be extremely difficult to get sufficient calories or fluid into Dr. Hush Puppy; a very sick kitty. Even though he was on anti-nausea and pain-control medications, he fought tooth and nail whenever it was time to feed him. Syringe-feeding was just not working at all and the stress and anxiety was making things worse.

After trying unsuccessfully for almost two days, our veterinarian advised us that Dr. Hush Puppy needed a feeding tube and she wanted to do this as quickly as possible. Our reaction to her suggestion was to “freak out” immediately; worried that Dr. Hush Puppy would suffer from the surgery.

However, when I read Dr. Pierson’s article on feeding tubes I found out that we were not alone; that many people reacted the same way when just the words “feeding tube” was mentioned. Our veterinarian explained that he would not suffer at all. In fact, he would suffer if deprived of sufficient nutrition and hydration. So to prevent his suffering we immediately agreed for him to have the procedure.

We quickly learned that in fact a feeding tube can be a lifesaver. And even though Dr. Hush Puppy’s condition took a turn for the worse, resulting in his death, we are thankful for the two weeks of a much better quality of life we were able to give him through the use of the feeding tube. He had no problems at all adjusting to these feedings. He wasn’t at all bothered by the bandage around his neck. In fact he got so used to the feeding schedule he was on that when it was time to feed him he would sit down at his “spot”, patiently waiting to be fed”. A full tummy and the added fluid were greatly appreciated.
The opening to Dr. Pierson’s article reads, “Feeding tubes save lives and are not used as often as they should be for anorexic patients.”

Although some people may believe that a feeding tube portends a cat’s death, Pierson says that,

“Feeding tubes should not necessarily be viewed as a doom and gloom ‘last ditch effort’ or as a ‘heroic measure’.”

Feeding tubes are generally used as a temporary stop-gap measure until the cat starts eating on its own.

Following the insertion of the feeding tube and sufficient recovery for discharge, the guardian can then syringe feed the cat through the tube several times a day on a prescribed schedule. Flushing the tube before and after feedings (as instructed by the veterinarian) adds much needed hydration. Additionally any medications prescribed by the veterinarian can also be given via the tube.

After the cat is gets the necessary protein and medications, as he feels better he will ultimately start eating on its own. Once the cat has been eating on its own for several days or weeks,(depending on the situation) the veterinarian will remove the tube.

If we faced again with the same situation (and I pray not), we wouldn’t hesitate to have this potentially life-saving procedure performed again. It is truly a miracle treatment that has no need to be viewed fearfully in a negative light.

What might be your reaction if your veterinarian recommended a feeding tube for your kitty? Tell us in a comment.