by Maria Clara
(the Netherlands)

This is my response to an article on the PoC blogger site: Ocelot kitten POC; Wild cats (new window).

About six years ago I met a charming man at a small party after work. A great storyteller, entertaining us with exciting stories about his past adventures. I stopped being amused when he started telling a story illustrating his cleverness in misleading the police with his (illegal) business in ocelot skins.

Apparently he talked about a truckload full of them. He even sketched the size of the warehouse were he kept them. Since the ocelot is about twice (maximum) the size of an average housecat this merchandise would have been the result of many, many kills.

I can’t even try to imagine how many. Perhaps it wasn’t ocelot, but a similar type of wild cat that he mistook for ocelot, or a collection of different small, wild cat skins altogether. He might have been exaggerating or, he might have borrowed the story from someone else, or even might have made up the story himself.

Anyway, I was shocked by the story and couldn’t react at all. In my mind I wandered off to my childhood in Surinam in South America. I thought about the beautiful ocelots I had known there.

My family lived in the main city and capital of Surinam, Paramaribo (see map below – this place is inside the range of the Ocelot). Normally a small city girl like me would not have any chance of an encounter with an ocelot, let alone meeting ocelots on a daily basis. Even during a trip into the tropical rainforest a chance encounter with an ocelot, or any of the small wild cats living there, are (to my knowledge) extremely rare.

But still, my younger brother and I met two ocelots everyday. At that time (1960’s), two ocelots were living in an enclosed part of our (eccentric) neighbour’s (reasonable sized) garden. Both my brother and I were fascinated by the beautiful wild cats next door.

Watching the ocelots was one of our daily activities. Often during ‘siesta’ time, when our mother was asleep, and we were supposed to be sleeping too. All mothers in the neighbourhood tried to keep their children away from the ocelots. The ladies, my mother included, told all kinds of horror stories about how dangerous these small cats are, how they enjoyed killing and eating small children. I don’t remember if my brother and I believed these stories, I don’t even know if there is any truth in them at all.

If so, the attraction of the wild cats exceeded any fear that might have been planted in our hearts. Every day we went to the ocelots, watching them, talking about them between the two of us. Sometimes, there were other children present, one or two, but most of the time it was just my little brother and me.

Sometimes, the ocelots would be out of their enclosure, chasing (living) chickens that were fed to them in the garden. I don’t remember that we were shocked by this in anyway. Again, we watched the chase and the kill of the game with fascination, even admiration.

Over time we watched the ocelots grow from smaller, young cats (not kittens though) to young adults. When my family left Surinam to immigrate into the Netherlands, the wild ocelots were still living with the neighbour. We had to leave our family pets behind in Surinam: three dogs, two cats and a stray turtle that lived in our garden.

Besides the turtle, they moved to friends and family who promised to take good care of our pet friends. In Holland we received letters (no internet back then) how our pets were doing in their new homes. All was well. No one had any idea how concerned we kids were about the ocelots. So, no one took the trouble to inform us about them. For some years my brother and I kept on talking between us about their welfare. Are they still alive, are they well, what kids are watching them now?

A lucky girl I was to live next door to two gorgeous ocelots. As I am a middle-aged woman now, I wonder why any sensible person would want to keep ocelots in their city garden in Paramaribo. We’re talking about Surinam, a country that (still) has 75% tropical rainforest, and only 25% more or less densely populated area.

I really don’t know if there was a happy ending for the two wild cats. I would have liked a happy ending where the ocelots would have been re-released back into the wild in a part of Surinam where no people live at all.

One story we heard (much later) was a rumour that our neighbours divorced because of the cats. The lovely wife had had enough of wild ocelots in her garden, the husband wouldn’t separate from his cats. So I guess, if this story is true, the neighbour took care of the ocelots for the rest of their live. There is another story though that says that the neighbour sold the ocelots to a zoo in Europe.

Whenever I talk about these ocelots to people who lived in Paramaribo in the 1960s, no one seems to remember them.

Hi Maria… thanks for sharing again. I find your story very interesting. 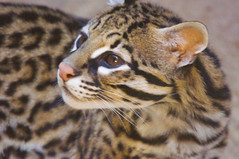 You are right. The wildcats are hard, very hard, to see in the wild.

Unfortunately, ocelots are sometimes owned as pets. There is a human fascination with “exotic” wildcats and wildcat hybrids.

Personally, I would much prefer if we, the human race, learned to live with wildcats that live in the wild. We just can’t achieve that. We much prefer to keep them captive, under our control.

Thanks for a unique story. See Ocelot Range.

From Two ocelots in Paramaribo, Surinam to Wild Cat Species