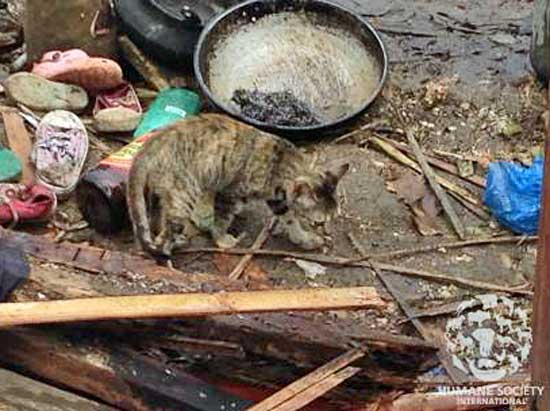 The only photo I have seen of a cat in the Philippines in the area of typhoon Haiyan since it struck  is the one above on the Human Society International website. Not much to shout about.

I am concerned about the rescue of cats after typhoon Haiyan. Of course, all animals concern me but my focus for this page is: what is happening to the cats? All the mainstream news articles both online and in hard copy focus on people. At the current count over 5,000 people were killed. What about the animals?

To be honest it is quite hard to find out. You have to dig down into the internet and hope that you bump into some information.

Humane Society International (HSI) thankfully provides some information. They report that three of their veterinarians and two technical staff were headed towards the worst hit ares, Leyte and Tacloban City on 12th November.

HSI report that at 22nd November their team had set up an animal shelter in Cebu. They also report that they brought in 11 rescued companion animals including seven dogs and two cats. Seven of the animals were reunited with their owners within two hours. They don’t say whether the cats were reunited.

On a page entitled “Rescuing Pets After Typhoon Haiyan” and dated November 20, 2013, HSI state they they have a team of four lead by Dr. Rey del Napoles on the island of Leyte. They don’t provide any details

The Philippine Animal Welfare Society (PAWS) have no details about what they are doing rescuing companion animals after the typhoon.

The Philippine Animal Rescue Team (PART) has no information about any work they might be doing rescuing animals after typhoon Haiyan. Their last post on their Facebook site is dated 21st November but does not relate to the typhoon.

IFAW Animal Rescue – Philippines have a video about animal rescue after a typhoon in the Philippines but it relates to a previous typhoon: Ketsana. There have been a series of typhoons in the Philippines recently and some people believe the extreme weather is due to global warming.

Conclusion? There is very little indeed on cat rescue on the internet after typhoon Haiyan. Just a mention of two cats by HSI.

I am afraid that there will be lots of cats that were killed outright and many injured but subsequently died. I thought that I would be able to report much more on animal rescue but there appears to be virtually nothing even though it is now the 24th and the typhoon approached the Philippines on the 7th November. It was the strongest ever typhoon on the Philippines and the fourth strongest winds ever recorded since records began anywhere on the planet. 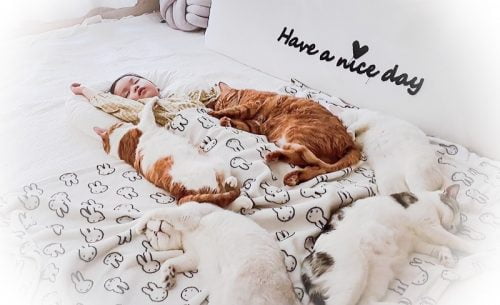