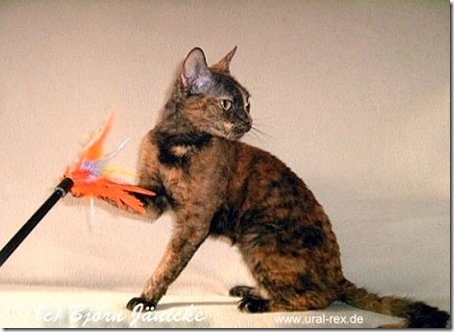 The Ural Rex is a relatively new cat breed. It is medium sized and well-muscled. In keeping with all Rex cats, they have a curly coat, resulting in an unusual and interesting appearance. The waves are “flexible”. The coat is medium or short in length.

This interesting new breed was recognised by the World Cat Federation (WCF) in 2006. The future is bright for the Ural Rex. What about its history?

Note: I wish to thank Ilona Jaenicke for the information and pictures on this page. Ilona works with her son, Bjoern Jaenicke, the owner of Iset’s Ural Rex and hybrids – click the banner below to go to the website.

Update May 27, 2022: This page needed to be updated. It was first published in around 2009. As at the currrent date the website for this breeder is down. It no longer exists. I therefore presume that they have stopped running their business. This is (or was) a very rare cat breed. I believe that this was the only substantial page on the breed on the Internet at one time. And the photographs on this page are equally rare. I am keeping it as an archival record. I do not know whether this breed of cat is available for purchase anymore. It might be but it is unlikely. Please leave a comment.

The founding cat was a curly black bicoloured cat named, “Vasilij”, born in 1988, in Zarechniy not far from Svedlovsk, which is now Yekaterinburg. The push pin below marks Yekaterinburg, Russia. 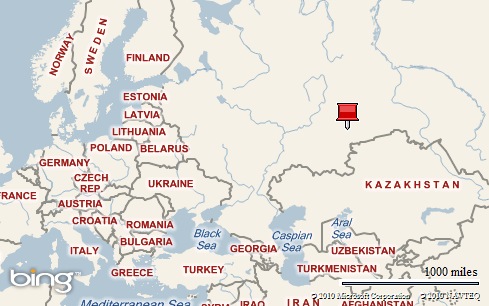 Vasilij was mated to his mother, Mura, to help fix the curly coated trait. His mother was a black and white spotted short haired cat who produced one female, Murka and one male, Mars. Further inbreeding followed including Murka mating with Vasilij. No anomalies have been found in the inbreeding program. The gene pool was widened by outcrossing to the European Shorthair.

The breed was further developed in Moscow from 1997 onwards after T.S.Emelyanova took three cats there, one male and two females1.

In June and August of 2007 two German breeders from Saxony became involved in the development of the Ural Rex. The foundation cats for the Ural Rex breeding in Germany are:

In August 2008, Pinky-Isabell, a tri-colour cat, produced the first litter of hybrid kittens. In 2009, Dorothea Uraloschka produced a litter. The father was a black silver tabby male called, Bahrain.

The aim is to further develop the breed and the group is looking for stud owners and interested breeders. 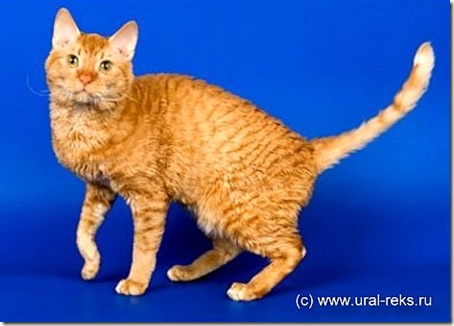 The Ural Rex is a healthy cat. The gene that produces this interesting coat is not the same as the, currently, better known Cornish Rex.

The fine coat is dense and lies in double close lying waves. The genetic code is ru/ru. The coat develops with the age of the cat. The coat structure forms at a earlier age than previously due to the development of this cat breed.

The Ural Rex is a charming domestic cat; alert and active, whilst being very good with children and other cats and animals. 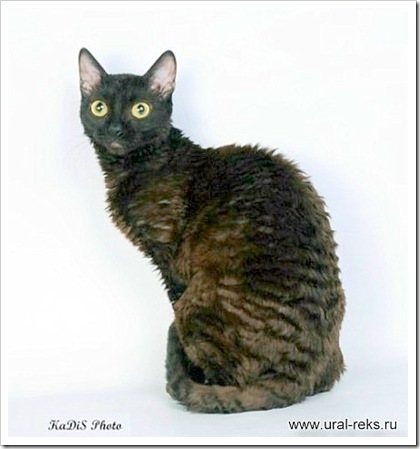 Tail: medium long, not broad at base, ending in a slightly rounded tip.

Head: short, broad equilateral wedge. The broad forehead is flat. The profile is slightly curved at the level of the lower lid. The cheekbones are prominent with an obvious pinch. The muzzle is broad, chin and lower jaw are strong.

Ears: Medium sized, rounded at the tips, set high on the head and upright.

Eyes: Large, oval and slightly slanted. They are set wide apart (at least the width of an eye). Eye colour to harmonize with coat colour.

Coat: Medium long, fine, soft, silky and dense. It covers in loose waves and curls the whole body and the tail. A special feature of this breed is a conspicuous elastic quality of the wave.

Colour varieties: Chocolate and cinnamon and the according diluted colours are not accepted in any pattern combinations (solid, bi-colour, tri-colour, tabby). Also, the Burmese colour restriction and the Abyssinian ticking are not accepted. Any other colour is accepted, the descriptions of colours are listed in the General Colour Guide. Any amount of white is allowed.