The UK government, today, has encouraged Britons to deck their homes in red, white and blue bunting to celebrate VE Day. My neighbour across the road has dutifully done this and initially I wondered why! Today is the day we remember the end of World War II, 75 years ago. Celebrating the moment does not sit very well with the coronavirus crisis and neither does it sit very well with the massacre through mass euthanasia of an estimated 400,000 cats and dogs during the first week of World War II. On September 3, 1939 Neville Chamberlain announced on the BBC that Britain was at war with Germany. Despite a complete lack of attacks by the enemy on British soil almost half a million cats and dogs were killed in 7 days. It was an organised, voluntary, companion animal massacre.

It is reported that chloroform was used to euthanise at least some of these animals. Many Londoners voluntarily chose to put their animals to sleep. The queued for half a mile around clinics. There was a shortage of chloroform and a waste management crisis.

The massacre was lamented and apparently government officials and animal charities protested. Hilda Kean wrote a book about it entitled, “The Great Cat and Dog Massacre, The Real Story of World War II’s Unknown Tragedy”. She concluded that this catastrophe was not the result of panic but of a “particular prior existing relationship within a household”. I’m not sure what she means. Perhaps she means that a lot of people used the moment as an excuse to get rid of their cat or dog. But obviously there were many households in which the occupants decided to keep their pets safe. This saved three quarters of England’s pet population.

The government at the time encouraged it. They formed the National Air Raid Precautions Animals Committee. Their task was to decide what to do with cats and dogs before war broke out. They were concerned that British citizens would have to split their food rations between themselves and their companion animals. They decided that people would end up starving their pets. In response to this thought they provided advice in a pamphlet which suggested that they move their pets from big cities to the countryside. They said that if people couldn’t place them in the care of neighbours the kindest thing to do was to have them destroyed. I’m not quite sure what they mean by “neighbours” in this instance but the gist of the advice was that they should euthanise their pets if they had to, and a quarter of the country’s companion animals were killed as a result.

As mentioned, many people were against it including veterinary groups such as the PDSA and the RSPCA. They considered the measures to be too drastic but nonetheless they were flooded with requests in the first few days after the outbreak of war. Maria Dickin, after whom the Dickin Medal for animal gallantry is named, said:

“Our technical officers called upon to perform this unhappy duty will never forget the tragedy of those days.

In September 1940 when the Germans started to bomb London more pet owners rushed to clinics to have their pets euthanised. They were worried about food shortages and the threat of bombing. Also, companion animals were regarded as a luxury during wartime Britain. Battersea Dogs and Cats objected to it and managed to feed and care for 145,000 dogs throughout the course of the war. Remember that this celebrated cat and dog rescue facility was and still is located bang in the middle of London!

It is estimated that over three quarters of one million pets were killed over the course of the war. Once people had got used to the war and a new regime of discipline and taking orders from government, they apparently regretted what they had done in killing their pets. They blamed the government for starting an hysterical reaction to the outbreak of war.

Let’s remember those cats and dogs and other companion animals whose lives were cut short because of the human folly of a world war. Also let’s not forget the feral cats who died in the bombing of Britain’s major cities.

A report by a British ISIS fighter, Abu Adam Al-Britani, tells us that life is dire and dangerous in Raqqa, ...
Read More

The video says it all really but I'll add some words. First up; Sadie looks like a Turkish Van, she ...
Read More

What is happening to Aleppo’s animals?

Civilians are being evacuated from Aleppo as the rebels have been routed by Assad's forces with the aid of Russia ...
Read More

Assad or the Russians bombed a famous cat sanctuary in Aleppo

You remember that heroic guy, a former ambulance driver and electrician, who rescues cats in Aleppo, Syria? Well I wondered ...
Read More

Millions of people believe that the world is about to end and that is will happen in the Land of ...
Read More 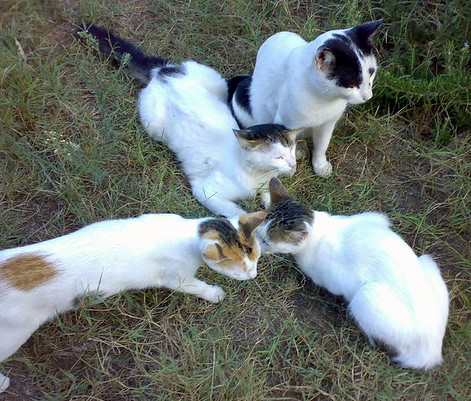 by Michael (London, UK) Cats in Tripoli, capital of Libya - Photo by Tark Siala (Flickr)March 2011: At the moment ...
Read More

I will comfirm registration in a return email. You will receive notifications within 24 hours.