This is the sad story of an inexperienced cat owner. She had adopted a female kitten who was about 5 to 6 weeks of age at the time. She leapt onto a hot oven door. A pizza was being cooked. The kitten’s paws were singed and burned. As far as I can tell the injuries was not that bad. The right paw was worse than the left.

The cat owner took her kitten to the veterinarian immediately. In her inexperience she was talked into having both paws declawed by her female veterinarian.

The first advice she gave was that the claws of the right paw should be removed although it is almost certain that the burns were superficial. The argument the vet gave was to prevent infection! Can you believe that? That sounds like a lie to me. Let’s not forget, by the way, that declawing is not just removing the claws themselves but that part of the toe which is beyond the last joint. It is an amputation. And it is done five times for each paw.

Then the veterinarian said that in order to keep the kitten in balance she needed to declaw the other paw as well. The whole thing sounds very cynical to me.

There was no need in the first place to declaw this kitten. The veterinarian took advantage of an inexperienced cat owner. She saw her coming and thought she would talk her into declawing because it made the veterinarian more money. 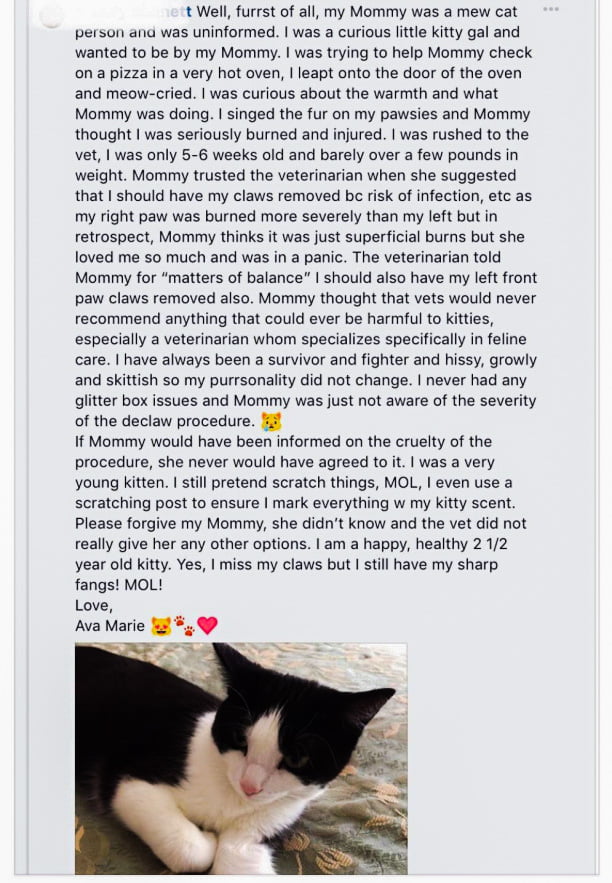 I found the Facebook post, which is a screenshot on this page, to be very poignant and actually very sad to be honest. The cat owner is making light of what happened in a slightly humorous post but underneath this there must be a lot of unhappiness because a big mistake has been made and the life of this kitten will never be the same again. She has lost an important part of her anatomy and it can affect behaviour. It can also affect the cat psychologically and sometimes there can be long-term or permanent pain and conditions such as arthritis. This cat might be lucky. But you don’t need to put your cat under this sort of risk.

Anybody who thinks that veterinarians don’t do declawing to make money in a cynical way should reflect on this post. I’m not saying that all veterinarians do the same sort of thing but it does happen and this is one good example. It is particularly cruel because this is a very young kitten who has been burnt and then the veterinarian compounded the problem by declawing. That must be a complete violation of the veterinarian’s code of conduct and oath.