Who has who on the leash?

It's been a year and a half since we adopted Snow White, our 10+ year old moggie. As we live on the 2nd floor, her outdoor activities have been restricted to our rather large balcony, where she has contended with sunbathing, sniffing the flower boxes and looking at the birds in the garden below.

We actually thought she'd been an indoor cat all her life - until today...

It was visiting the chillicat dot org site that gave me the idea that even a relatively old cat could be taught to walk on the leash. I had the leash and the cat, so why not give it a try?

Against it spoke the fact that years ago, when we tried taking other cats outside, they were terrified by the whole wide world. For it spoke that besides being well behaved, Snow White has a very calm and collected character, or maybe it's just laziness. 😉

So this afternoon I put the harness on her, attached the leash and carried her downstairs. She meowed a little, maybe because passing the door step usually means visiting the vet, but I easily calmed her down and placed her on the ground in front of the house.

She was cautious as any cat would be in a new environment, but very curious about everything too. She particularly enjoyed sniffing the plants and bushes and rolling around on the ground.

She is a cat, so of course she had her own ideas about where to go, but one thing that really surprised me was that she in no way struggled against the leash as our other cats done. So I figure she must have been used to it from before we found her. At any rate this was a very positive experience for the both of us and definitely something to be repeated from now on.

Here are two more photos. Click on them to see a larger format version: 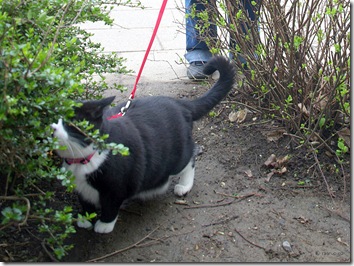 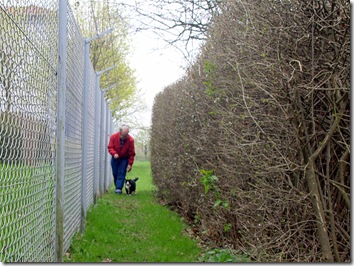 Walking an old cat on the leash to Cat Facts