New Forest, an inspiration for the location of Warrior cat series photo © eyesore9 under CC

In the Warrior Cat Series the feral cats of ShadowClan are the Alpha Cats, ambitious and greedy. They are the equivalent of the "financial experts" in the human world and the chief executives of big companies. I don't like ShadowClanners!

The Warrior Cat series of books is about feral cats, isn't it? After all Rusty leaves his cosy human home for the lure of the wild in the forest and becomes a leader. He is a classic feral cat. So totally wild - no. Although there is a wild cat waiting to get out in every domestic cat.

Timmy our stray who comes in for breakfast and dinner is a classic warrior cat. He's a tuxedo cat, slender and agile. Soft at heart, tough when needed - a leader. He'd be in Thunderclan.

The Books used to be written by two women with one of them doing the storyline and checking consistency.

Now there are three authors and one storyline writer. The new author is Tui Sutherland.

The Warrior Cat Series tells the story of "clans" of feral cats surviving in a forest. There are 3 mini-series of books. The first was published in 2003.

The first book, "Into the Wild", tells the story of Rusty who succumbs to the call of the forest and who is taken in by ThunderClan as an apprentice named "Firepaw" because he is a ginger cat (technical term: red solid). The other clans are RiverClan, Windclan and ShadowClan.

Rusty becomes a warrior and then a leader, "Firestar". The mini-series that starts with "Into the Wild" ends with book 6, "The Darkest Hour".

Thunderclan members are fierce and brave. They are respectful of others and great fighters with good characters, knowing right from wrong.

RiverClan members are related to the Asian Fishing cat it seems as they mainly eat fish and swim strongly. A number of purebred cats like water, usually the wildcat hybrids. The Turkish Angora does too. Members of this clan are contented and well fed.

StarClan is the spirit home of all warrior cats once they pass on from this world. Silverpelt, the swath of stars in the sky at night represents StarClan. A warrior cat spirit remains loyal to his/her clan. 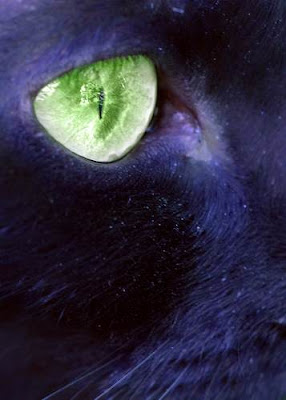 "The New Prophesy" is the 2nd in the Warrior Cat Series. The first book in this mini-series is called "Midnight". The story starts twelve moons after the end of the "The Darkest Hour". The book is centered around humans' desire to build a road through their home, the forest. This reflects so well what is going on in the world generally causing the gradually extinction of rare species of animals. Mankind's actions are often hostile to the feral cat and many millions are deliberately killed each year because there are no human homes (rescue center) for them.

The Clans should rise up and tell humans to behave better! Or they should follow the Warrior cat that has entered their midst. He is a warrior knight who has come to them to lead them into the light - the light of a brave new world.........

The 3rd mini-series is called "Power of Three". It tells the story of 3 young cats named, Hollypaw, Jaypaw and Lionpaw. All are Firestars grandchildren. Jaypaw is blind. Blind cats can survive well and show great dignity and use their remaining senses well. Jaypaw trains to be a medicine cat. Some blind humans achieve lots too. But it is a tough road. This series centers around the prophesy, "There will be 3, kin of your kin, who hold the power of the stars in their paws".

One setting is the New Forest in England, a very popular place. This is shown in the heading photograph. Other influencing areas are the Forest of Dean and the Scottish Highlands, all fine landscapes.