WE BROUGHT A KENNEL HOME ON A SKATEBOARD

On our last legs!

The continuing adventures of 'girl power' or maybe it should be 'granny power' lol...One of our neighbours often goes off out, leaving his elderly cat (Narla, see below) out for long periods of time.

OK in the nice weather, we feed her and keep an eye on her and she enjoys sitting in the sun. But not so good in the winter, and try as we may to entice her in for a warm, she just hates being in anyone's house but her own.

So, we saw a dog kennel advertised for £15 and thought that if we could somehow get it into the corner of Sylvia's front garden as she's in the end house, the cat would hopefully use it as a shelter.

Off we went to see it, about 10 minutes walk away, it was ideal and when we explained to the lady what it was for she said we could have it for a tenner!

But how to get it home as it was really heavy and bulky? Babz spotted a skateboard and asked could we borrow it? Well somehow the 4 of us managed to get the kennel balanced on it. But then we couldn't get it through the passage from the back garden out to the front road.

The woman shouted her hubby out, he wasn't in a very good mood as he was happily watching TV, but he came, gave it a good shove and it shot through the passage. His smirk said 'Huh, useless women' and off he went back to his viewing. His wife took the tenner 'Bye' she said 'just drop the skateboard back later'.

We must have looked a funny sight coming along the pavements with our burden, unfortunately we have no photos until we got back as none of us dare let go of our bit of kennel lol.

Eventually we struggled back to where we live. A few neighbours looked mildly interested, but with a 'What are they up to now' look on their faces lol.

What a job to get that kennel off the skateboard, up the steps and in position. But we did it! Was the cat grateful? 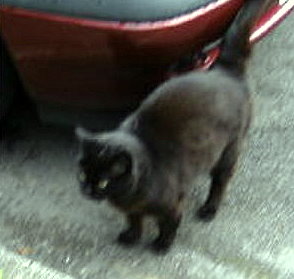 No, not at all, she has never stayed and still won't stay in it even in all the snow we've had, despite us enticing her with tasty food lol she eats it and comes straight back out.

WE BROUGHT A KENNEL HOME ON A SKATEBOARD! to PoC Forum