Note: I respect the views of Lisa James in her article, The Turkish Van and the Turkish Angora and welcome her comments and posts.

Firstly, in the say 17th century, all cats were moggies. They were just cat companions, feral cats or in between. This means that cat types were naturally less distinct from region to region and type to type as breeders had not at that time delineated the breeds through selective breeding. There were no formal breeds in those days. Although there were informal breeds if that is an acceptable way of describing them. I am thinking of, for example, the Manx cat.

In Britain, for example, there were the forerunners of the British Shorthair. But the cats of that time in Britain were not like the classic purebred British Shorthair now, with the flattish face. They were “ordinary” cats in every way. The current appearance was developed by breeding. The first point that I am making is that I suggest that the distinct but relatively slight difference between the Turkish Van and Angora that is visible today has been developed by the cat fancy. I argue that it was not that way hundreds of years ago. The Wikipedia author says:

…And even at present, when it was confirmed by the geneticist that Vans and Angoras are definitely separate breeds, Vans are sometimes confused with Turkish Angoras, although a side-by-side comparison reveals vastly different characteristics.

But the author makes no references to substantiate the genetic differences and I mean that there would have to be genetic differences that can be proved to originate in the 16th century and earlier. This, I suggest, can only be carried out in Turkey and I know of no research. Further the difference now in appearance is not stark and is due to breeding by the cat fancy and not the origins.

There is no reason to believe that a distance of 500 miles can make a difference in the basic genetic characteristics of a moggie cat in one country. Also Lake Van is over 5,000 feet above sea level in what might be called similar terrain to the “mountains” near Ankara. In fact the area around Ankara is more hilly than mountainous.

In addition, there are single wild cats species that have ranges that cover two continents, many thousands of miles and many countries that substantiates this contention. I refer to the Puma as one example. Other examples are the leopard, Eurasian lynx and jaguar. There are more. It is far more likely that the moggie of Turkey in the 17th century was similar throughout Turkey.

I refer for example to a painting from the late 1700s Paris, France of a cat that is either a French moggie or a Turkish Van import or a bit of both. If it is a French moggie the Turkish Van is not unique to Turkey and if it is an import from Turkey it substantiates my ideas. You can see this painting and another discussed on this page: Jean-Honoré Fragonard Le Chat Angora. 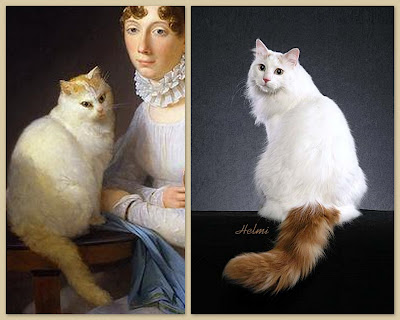 If I am correct, in answer to the question, were the Turkish Angora and Turkish Van the same cat, the answer is yes, more or less, and the cat fancy has made two cats out of one moggie. This is not a criticism of the cat fancy. It is normal and to be expected. There are over 70 mainstream cat breeds. The cat fancy has created more breeds in the same way any business creates more brands (
for example Purina has many brands of cat food). It is just the way the free market operates.

Many will be horrified by this train of thought. That’s OK. They are just thoughts.