A “biome” is a large area which has commonality in respect of climate, vegetation, wildlife et cetera. At 2002 the distribution of the flat-headed cat was southern Thailand, Malaysia, Sumatra and Borneo. At 2021 I’m told that this small cat species lives in South and Southeast Asia; specifically, Brunei Darussalam, Indonesia, Malaysia and Thailand. The sort of habitat that this cat lives in includes forest and wetlands (inland). That information comes from the Red List. The wild cat conservation organisation tells us that the flat-headed cat lives in riverine forest, peat-swamp forest, streams, lakes, marshes, swampy areas and tropical lowland rainforests. You can see that the flat-headed cat likes water. Its morphological specialisations (shape and structure) tell us that it is a cat whose diet is composed largely of fish which is why its distribution is closely associated with water.

An endangered flat-headed cat (Prionailurus planiceps) at the Taiping Zoo. Photo: Joel Sartore – National Geographic photographer and speaker. You can see the flattened head shape from which its name is derived. Click the image for a large version.

Specimens have been collected along rivers and streams and in flooded areas. They might live in oil palm plantations in Malaysia. They say the cat is nocturnal. Under a spotlight at 11 PM along the Merang River in south-eastern Sumatra, a couple of flat-headed cats were on opposite banks and 100 m apart. This species of small wild cat has been seen on mud banks and along rivers where they were hunting.

They have a great affinity for water. When captive kittens were given a large bowl of water they immediately jumped in and began to play. In addition to fish they feed on rats and mice including amphibians such as frogs and sometimes crustaceans. They are a rare and elusive species and as at 2012 there were only two zoos which had successfully bred the flat-headed cat.

Source: Wild Cats of the World referencing inter alia: Guggisberg CA Wild cats of the world and Schaffer N and others in a report funded by the Institute of Museum Services, Special Conservation Project. Also, the IUCN Red List.

SOME MORE ON THE FLAT-HEADED CAT:

The flat-headed cat’s scientific name is Prionailurus planiceps, which is based on genetic testing. There are no subspecies. It is ...
Read More 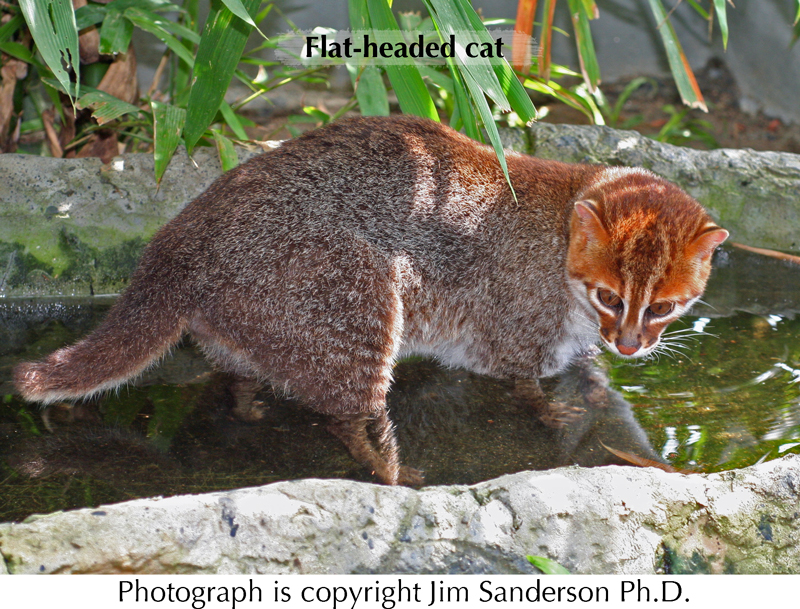 This cat more closely resembles a mustelid (weasel family) or an otter than cat, it is said. This is because ...
Read More