Fido likes to sprawl on the dining table

I got Fido as a kitten. The mother was a large white cat, medium hair length, green eyes, about 15 pounds. The father is unknown. When I took Fido to his first vet visit, he weighed 3 pounds, was still wobbly, and the vet said he was 10 weeks old. By 6 months of age, he weighed 11 pounds, and the vets initially looked annoyed with me at first because they thought I was bringing in a full-grown cat to be neutered! 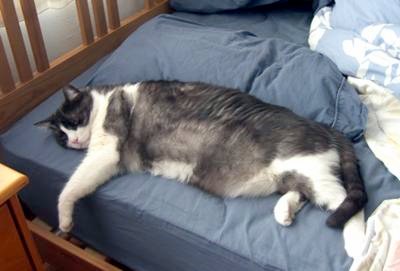 As a kitten, he acted somewhat Maine Coon-like: squeaked instead of meowed, liked water, goofy. He also was a terror, and his main amusement was ambushing anyone and biting them on the leg. As an adult, he is very shy around strangers, will hide in the closet if anyone comes over, and he is vicious at the vet (scratches, growls, etc).

He is quite intelligent and good at catching and killing things. He catches and eats: cockroaches, large moths, June beetles, crickets, grasshoppers. Other prey: lizards (he likes to remove the tail), a bird (sad), a baby Norway rat, a mouse, and a 3 foot long garter snake.

Supposedly, domestic shorthair cats don't get this big. So, what is he, then? Can a Maine Coon mix have short hair?

What Breed is My 20 Pound Kitty? to Largest Domestic Cat Breed